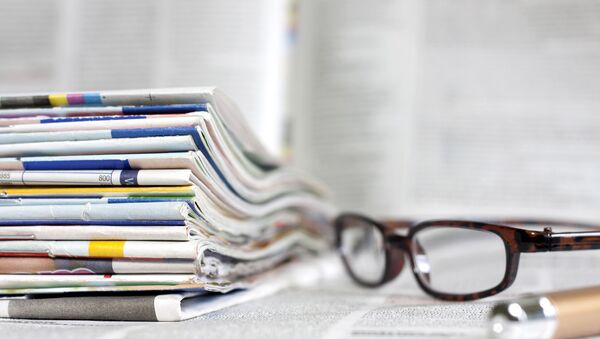 © Fotolia / udra11
Subscribe
International
India
Africa
The blind drive by the US in pursuit of their geopolitical objectives in Europe and in Ukraine has placed the entire European continent in an unstable and extremely dangerous position.

There is fear spreading through Europe of the specter of war, fuelled by aggressive war propaganda by the West in their attempt to demonize Russia. In Germany, for the first time, people do not trust their mass media. All over Europe appearing strange fascist parties. The blind drive by the US in pursuit of their geopolitical objectives in Europe and in Ukraine has placed the entire European continent in an unstable and extremely dangerous position.

Willy Wimmer, the former Vice President of the Parliamentary Assembly of the Organization for Security and Cooperation in Europe speaks with John Robles about these issues and more.

Hello sir, how are you this fine evening?

Hello! Everything is okay here but not worldwide.

Unfortunately! A lot of things going on! You wrote a very interesting article recently in German regarding, what you say, is an "ultimatum" by the West towards Russia. Can you tell us about that?

Yes! We learned last weekend that the European Union had addressed, as I see it, an ultimatum to Russia to continue with serious negotiations regarding the events in the Ukraine and if they wouldn't continue to have serious negotiations, there would be serious economic sanctions to Russia. This was in a tone which I never heard before. And the way to address an ultimatum to a neighboring state is quite unusual, quite unusual with this special attitude.

When we go back to the summer of 1914, when the first world war started, we had the same language. And therefore, I was in fear, as many Germans were in fear, because of the events in these days.

What in particular are you alarmed with?

The way we get information about the events in Ukraine and the Russian leadership is also quite unusual, compared to difficult times we had in the past.

Usually the German mainstream media are more or less objective, but in the case of Ukraine, it is attitude is to condemn Russia and to condemn the Russian President Putin. The attitude in which this is being done is not the attitude of German publications we had in the past. And, therefore, people are scared because of the new way in which German TV and press address issues in the neighboring countries.

Who do you see as being "the hand behind" this aggressive propaganda? Some people are calling it "war propaganda".

There is in preparation of difficult events. We had it for the first time when the war against Yugoslavia started, when they attacked President Milosevic in a very personal way and when they attacked the Serbs. And we had the same situation before entering the war against Iraq, when they addressed Saddam Hussein in this way. And, therefore, people think that we are now entering a similar situation. But for the first time people here in my country, they don't trust the mainstream media any longer. You can read it in the articles they write to these newspapers, there you find the real attitude of the German people, and it is completely different.

If we can go back in history for a minute. I know it is a sensitive topic for the German people. Do you see that media manipulation equivalent to what happened before Hitler came to full power?

We had some years ago a Government in Austria where right-wing people entered the government and the first reaction of the European Union was to have the Austrians being banned from the developments in the European Union. At that time, they took it very serious.

That is a very good question! I would like to get your opinion but first, I would like to give you my opinion and then see what you think about it: as far as I understand, the CIA and the military industrial complex in the United States have taken control of the Government. They will ally themselves with anyone, as long as it serves their goal of defeating an enemy. This time the target is Russia. There is not anyone else who is going to fight Russia or that they can use against Russia. And that is why I think they are supporting these Nazis. Do you agree with that?

Yes! There is a good understanding here that forces in the United States or in other countries, they act together with those who are willing to act against the common enemy. And there are strange words in Germany about such an attitude. And, therefore, it is complicated.

We know for years that the right-wing forces in Germany are financially subsidized out of the US, out of Denmark, out of the Netherlands, out of France and out of Spain. So there is obviously a development on the Western side of our common continent, which is dangerous not only when you look into history.

What do you think is going to happen in the near future and down the line?

The US had promised President Gorbachev not to expand NATO to the east. And the problem has been that Gorbachev trusted the Americans. In such a way you destroy all kinds of trust.

We had a unique understanding not to exploit the developments against the former Soviet Union and not to expand NATO.

And we saw in the '90s what really happened and this was not in accordance with our understanding. I remember very well when Kohl in the early 90's returned from visits to the United States, he always addressed the Parliamentary Group of the CDU/CSU and he was always in a strange feeling about his visit to Washington.

He told us: when I visited Washington, people in Congress told me; "We have won the third world war". And Kohl was of the opinion that: "… you can't treat the Russians in this way. These are a great people and they deserve honesty."

And this explains the whole situation which started in the early 90's and it is not ending only with Ukraine.

I participated in a conference in May 2000 in Bratislava organized by the US State Department. There were high-ranking people from Central and Eastern Europe- prime ministers, foreign ministers, defense ministers and so on. And the American State Department's representatives explained to the audience that the idea of the US is to draw a line between the Baltic Sea, between Riga and Odessa in the Black Sea and go from there to Diyarbakır in the eastern part of Turkey.

After the WW II many Nazis went to the US, something like 40,000, I believe, they founded a lot of programs in the CIA. Do you see any correlation?

When you look on the today's situation, it is obvious that the forces in the US are eager to get control over the Russian resources of oil and gas, and everything else. And there is an ongoing interest of these US forces to get in control of everything which is on Russian soil. And the former US State Secretary Ms. Albright made it very public that what is on the Russian soil, it can't belong to one country.

There is obviously an understanding which has the historic roots, which go back to the situation after the First World War.

There is a common understanding among historians that you can't explain Adolf Hitler without mentioning Henry Ford. And the most complicated problem in my understanding has been the efforts of Henry Kissinger in the late 90's to destroy the international rule of law, and to replace it by the American-led international law structure.

So, this is an ongoing thing and we are not at the end yet.

What do you think is the biggest danger right now facing world stability?

As long as the big shots are not willing to negotiate, and as long as they are creating the president of another country as a hostile individual, the world will continue to be a dangerous place.

I lived in Cold War times and I had been the Minister of Defense for the latest NATO exercise of the Cold War. I know what war means for my country or would mean for my country, and what it would mean for all of Europe. And, therefore, as long as we keep going back to the imperialistic attitude, there can't be a good solution.

As the former Vice President of the Parliamentary Assembly of the OSCE, what is your opinion on the killing of journalists, on the refugee situation in Ukraine and then the Russian reaction to everything that is going on there?

The killing of journalists is an organized effort to continue with the control of the mainstream media in the West.

For some weeks the only chance to get a fair picture of the situation in Ukraine on TV has been Russia Today, France 24 or Al Jazeera.

When you kill Russian journalists, you see efforts to maintain the dominance in propaganda. It is not a coincidence that journalists are killed. It is a combined effort to do so. And, therefore, it is an attack on democracy, that's for sure.

The refugee crisis in the eastern part of the Ukraine and in the western part of Russia, it is disastrous when you see the State Department officials, how they behave when it comes to the refugee numbers.

Here we know that more than 400,000 had to flee their homes in the eastern part of the Ukraine. This has to be stopped. And the latest negotiations between President Putin, President Poroshenko and Chancellor Merkel and President Hollande, we already can foresee the efforts being undertaken by London and Washington to destroy this productive effort.

With regards to President Putin, it is disastrous and it leads to a conflict, if you blame the president of another country in the way as it had been done here for weeks and months in the past. And we are all familiar with the words of Hillary Clinton and of others against President Putin.

We are now in the 25th year after the collapse of the Berlin Wall and here in Germany nobody has an understanding of blaming President Putin or the Russian people in the way that Hillary Clinton did it.