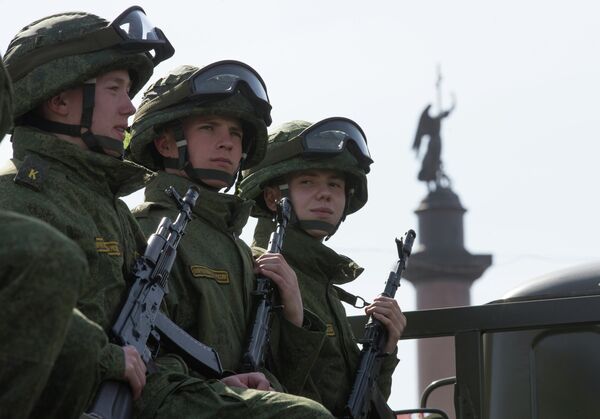 © RIA Novosti . Igor Russak
/
Go to the mediabank
Subscribe
International
India
Africa
About 86 percent of Russians believe that the Russian armed forces can protect them from military threats, a state-run pollster said Tuesday.

MOSCOW, April 29 (RIA Novosti) – About 86 percent of Russians believe that the Russian armed forces can protect them from military threats, a state-run pollster said Tuesday.

“The Russian army will protect our country if a military threat emerges – that’s the opinion of 86 percent of Russians. The number of respondents who gave a similar answer has grown by one third in one year, from 66 percent in 2013,” VTsIOM said.

Only eight percent believe that the Russian armed forces cannot protect the country.

A total of 52 percent of Russians believe that the country is under a military threat from other states, while 42 percent said there were no grounds to think so.

Russians are also positive about the way armed forces solve their current tasks. Russia’s actions to defend the country’s interests in Crimea got an average score of 4.42 on a scale from one to five, VTsIOM said.

The survey was conducted among 1,600 respondents from 130 Russian cities and towns in 42 Russian regions. The margin of error was 3.4 percent.