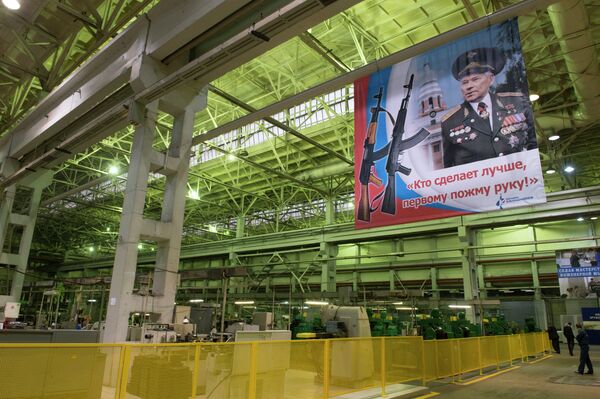 The Kalashnikov Concern produced 230 percent more small arms weapons in the first quarter of this year than in the year-ago period, the company's press service told RIA Novosti Monday.

"In the first three months of the year we had a record-high volume production of small arms in the amount of 31,000 items, which makes 41 percent of the total output of similar products for 2013," the company said.

"The current results are 230 percent higher than those in the first quarter last year," the company added.

Positive dynamics was observed in most areas of production in the first quarter of this year.

The Kalashnikov Concern was created in 2013 on the basis of the Izhmash and Izhmekh plants. It is now Russia's largest producer of automatic and sniper combat arms, guided artillery shells as well as a wide range of civil products, including shotguns, sporting rifles, industrial machines and tools.

The recently-formed Kalashnikov united a large number of state manufacturers of small arms weapons, and in the future a number of other plants will join the concern.

The products manufactured by the concern are supplied to 27 countries, including the US, the UK, Germany, Norway, Italy, Canada, Kazakhstan and Thailand.