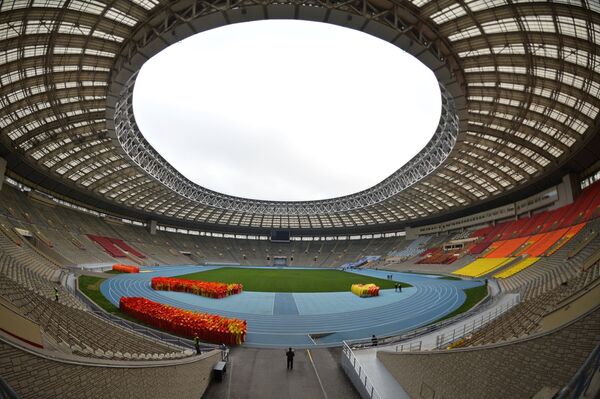 © RIA Novosti . Alexey Kudenko
/
Go to the photo bank
Subscribe
More than $8 billion will be spent on hosting World Cup 2018 games in Moscow, the Russian capital’s City Hall has said.

MOSCOW, April 21 (R-Sport) - More than $8 billion will be spent on hosting World Cup 2018 games in Moscow, the Russian capital’s City Hall has said.

Moscow is to host several games at the event, with the vast Luzhniki Stadium set to stage the opening match, one semifinal and the final. Spartak Moscow's new Otkritie Arena is also slated to host some group stage games.

Most of the 291 billion ruble ($8.15 billion) budget will go on a 192 billion-ruble ($5.39 billion) program of transport upgrades, while 33.8 billion rubles ($946 million) will be put towards sports facilities, including refurbishing Luzhniki, City Hall said.

While bidding to host the World Cup in 2010, Russian President Vladimir Putin said he envisaged a total spend of $10 billion, although Prime Minister Dmitry Medvedev raised the price tag to just over $20 billion in June 2012.

According to a budget document published on the website of the Moscow city government and dated Friday, only 64 billion rubles ($1.79 billion) of the total price tag for Moscow will come from city funds and less than $3,000 from the federal government.

The remaining 222 billion rubles ($6.21 billion) is described as coming from unspecified “non-budgetary sources.” For February’s Winter Olympics in Sochi, similar terms were used to describe funding from state-owned companies such as Russian Railways or gas firm Gazprom.

The sums in the document are far higher than those in a statement by Moscow’s top sports official Alexei Vorobyov earlier this month. He stated that the total “size of financing” for Moscow’s World Cup preparations would be around $2 billion, with just over $1.57 billion of that coming from the city budget. It was not immediately clear what caused the disparity with the new figures.

There was no news on whether the estimates in the new document would affect a 20 billion ruble ($562 million) tender issued in November for the Luzhniki refurbishment.

Luzhniki’s last major event in its current form was August’s world athletics championships, while the last football match played there was a league game in May.

The stadium hosted athletics at the 1980 Summer Olympics and is best known in footballing circles for holding the 2008 Champions League final, when Manchester United beat Chelsea on penalties after extra time finished 1-1. A crush at the stadium during a football match in 1983 left 66 people dead.

Luzhniki, built in 1956 and known as Lenin Stadium until the Soviet breakup, will host the opening match, a semifinal and the final of the 2018 World Cup.

Twelve stadiums in 11 Russian cities are set to stage the championships. All are to be built from scratch or undergo major refurbishments.

The November Luzhniki tender was announced just as Russia's newly formed Construction Ministry was granted supervisory powers over all construction projects for the World Cup.