Russia Begins Transfer of First Warship Back to Ukraine – Source 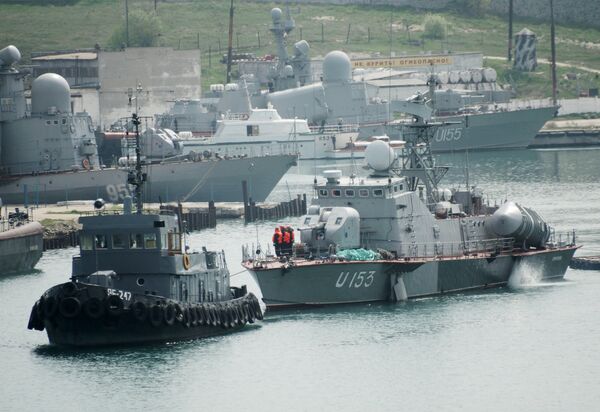 Russia has begun the process of transferring the first Ukrainian naval vessel in Crimea back to Ukraine, a source in the Black Sea Fleet Headquarters told RIA Novosti on Friday.

SEVASTOPOL, April 11 (RIA Novosti) — Russia has begun the process of transferring the first Ukrainian naval vessel in Crimea back to Ukraine, a source in the Black Sea Fleet Headquarters told RIA Novosti on Friday.

Once the Priluki leaves the port of Sevastopol, the boat will be towed to neutral waters by a Russian sea-going tug where it will be met by representatives of Ukraine.

Last week, Vitaly Yarema, the first deputy prime minister of the interim government in Kiev, avoided giving a specific deadline for the complete removal of troops and equipment from Crimea.

“I cannot say for sure, as it depends on a number of factors such as the pace and availability of transportation and the functioning of the railroad as well. But as of today there is nothing to hinder the process,” he said.

Russian officials have said the country is ready to hand over all Ukrainian weaponry left in Crimea if Kiev provides transportation.

“The Russian Defense Ministry is ready and willing to complete this work by June,” General Dmitry Bulgakov told reporters Wednesday.

Talks between Russia and Ukraine on arms transfers has centered on ground forces and equipment. There are still some 70 Ukrainian warships and other service vessels located in the waters of the Crimean Peninsula, with no established time frame for their return.

The republic of Crimea held a referendum on March 16 to decide on the status of its autonomy. The official result of the referendum was a 97 percent vote in favor of integrating the region into the Russian Federation, with an overwhelming voter turnout of 83 percent.

Russian President Vladimir Putin signed the federal law ratifying the agreement between the autonomous republic of Crimea and the Russian Federation to join Russia on March 21.

Although widely denounced by the West, Russia welcomed the results of the referendum, proclaiming it fully legitimate and in accordance with international law.