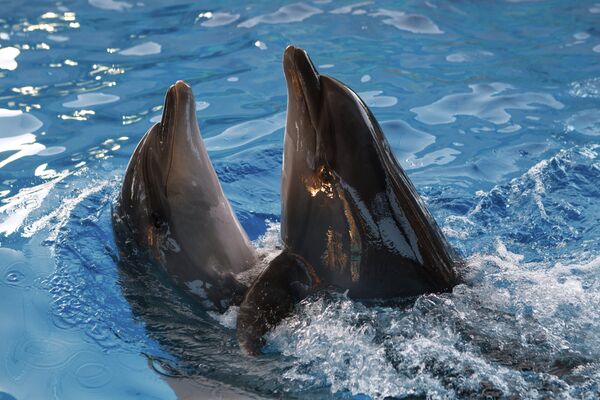 The combat dolphin program in the Crimean city of Sevastopol will be preserved and redirected towards the interests of the Russian Navy, an employee at the facility where the dolphins are trained told RIA Novosti.

SEVASTOPOL, March 26 (RIA Novosti) - The combat dolphin program in the Crimean city of Sevastopol will be preserved and redirected towards the interests of the Russian Navy, an employee at the facility where the dolphins are trained told RIA Novosti.

The program, dating to the 1960s, was previously scheduled to be disbanded by the Ukrainian navy in April, but the facility and the dolphins themselves have now become Russian following the reunification of Crimea with Russia last week.

"The oceanarium's engineers are developing new instruments for new applications to boost the operational efficiency of the dolphins underwater," the employee said, requesting anonymity. The employee added the animals are currently outfitted with extremely outdated equipment.

The dolphins are trained to patrol open water and attack or attach buoys to items of military interest, such as mines on the sea floor or combat scuba divers trained to slip past enemy security perimeters, known as frogmen. Man-made sonar systems are often incapable of detecting such small objects in crowded environments such as harbors.

"Our experts have developed new devices, which convert the detection of objects by the dolphins' underwater sonar to a signal on an operator's monitor," the source said. "But the Ukrainian Navy lacked the funds for such know-how, and some projects had to be shuttered."

Following the breakup of the Soviet Union, the dolphin program was handed over to the Ukrainian navy, where it was initially reconverted for civilian uses, such as working with disabled children. The military arm of the facility was re-formed in 2011.

The facility is one of only two such combat dolphin training centers in the world, the other is run by the US Navy in San Diego.