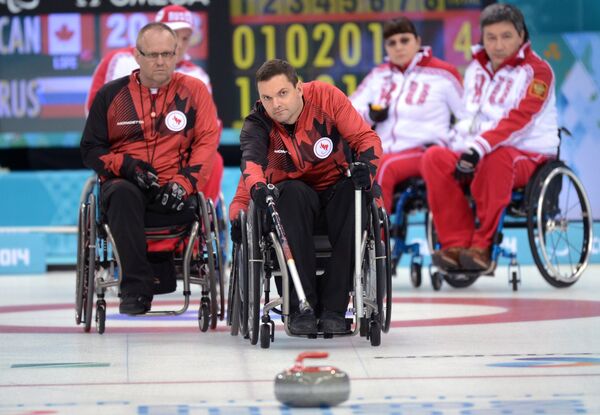 Russia may have dominated the Sochi Paralympics so far, but it suffered two setbacks Saturday, losing the sledge hockey final to the United States and the wheelchair curling gold medal game to Canada.

SOCHI, March 16 (R-Sport) – Russia may have dominated the Sochi Paralympics so far, but it suffered two setbacks Saturday, losing the sledge hockey final to the United States and the wheelchair curling gold medal game to Canada.

Elsewhere, the host nation’s hegemony in cross-country skiing continued unabated with two gold medals in the relays, while 16-year-old Canadian Mac Marcoux snatched gold on the piste in giant slalom.

Russia goes into the last day poised to surpass the 30-year-old record of 70 medals for a country at a single Paralympics, set by Austria in 1984. Such had been the Sochi host nation’s prowess over the preceding week that Saturday’s haul of two gold medals came across as something of a slow day.

Ahead of day eight, Russia had a hope of winning a gold in every one of the five sports at the Games, but the limits of its hockey and curling teams, both Paralympic debutants, were cruelly exposed in their respective finals.

The U.S. came into the hockey final as favorite but seemed at times to struggle with the vocal home crowd at the Shayba Arena and the hard-hitting game played by the Russians, who exceeded all expectations by winning silve.

Against the backdrop of tension between the U.S. and Russia over the fate of the Crimean peninsula in Ukraine, the game was hard-fought but fair, and the Russian crowd cheered the U.S. team at the medal ceremony and received the gold medalists' anthem with respect.

"I was really surprised that the crowd cheered," Sweeney said. "Sometimes you don’t know what kind of reaction you’re going to get. Even in the U.S. they might not cheer if somebody else won, so it was awesome to be able to get a cheer from the crowd."

When the final buzzer sounded, the U.S. players headed for the crease and huddled around goaltender Steve Cash, 24, who earned his third shutout in Sochi. The dejected Russians comforted one another as the home fans shouted messages of support.

“The Americans were faster than us and more experienced, but we tried, we gave of ourselves, we fought to the end” said Lysov, whose error led to the decisive goal. "You saw it, one mistake practically decided everything, as happens in finals.”

He added of the Americans: “We knew they weren’t gods, they were people too and we could play against them.”

Earlier, Canada won the bronze with a 3-0 defeat of Norway.

Canada has never failed to win gold since curling debuted at the Paralympics in 2006, and weathered an early threat from first-time competitor Russia to keep the gold medal at a packed Ice Cube Curling Center.

"It's tremendous. It's been a long week but we played well today," Canada's skip Jim Armstrong said. "It was probably our best game of the tournament. We got a couple of breaks early and as we learned this week, if you have to chase, it's a tough game."

The Russians, skipped by Andrei Smirnov, started strongly, taking two points off the first end. After that, however, it was all about the Canadians as the 63-year-old Armstrong led his team to eight points from the next five ends, including two steals when the Russians had last-stone advantage.

Despite the tension in Ukraine, Russian President Vladimir Putin watched in the mountains as Russia won two gold medals in the cross-country skiing relays at the Laura complex.

"It is the most hard-fought medal for me and the most valuable at the Games," three-time Sochi champion Kaufman told R-Sport. "It was my first career relay and I was worried a lot before the start. The responsibility to the team and the country is much higher than in individual races."

Russia’s ninth cross-country gold of the Games swiftly followed with a win in the open relay. The Russian team of four male skiers beat second-placed Ukraine by 55.1 seconds.

The most decorated athlete of the Sochi Paralympics, Roman Petushkov, took his sixth gold, while Vladislav Lekomtcev and Rushan Minnegulov grabbed their second victories. If Petushkov can win gold in the 10km race Sunday, he will match the record for most gold medals at a single Winter Paralympics.

"Roman is the main hero of these Paralympics and an example for our team," the youngest relay winner, Grigory Murygin, 19, told R-Sport. "It is so cool that we are in first place. I couldn't even imagine that Russia would win so many medals. But the Paralympics are not over and there will be even more."

A French team comprised of only two athletes, who each raced two stages, came third, 1 minute and 7 seconds behind Russia.

In the visually impaired class, the 16-year-old Marcoux and his guide Robin Femy managed to keep his advantage he gained in the first run, beating second-placed Jakub Krako, 23, of Slovakia by 2.04 seconds.

"I can't even think right now, I'm so excited. It has been an amazing experience," said Marcoux. "This is a dream come true. It is so surreal, I was nervous at the top. I tried to relax and forget about everything, listen to music, because when you think too much it can mess with your head."

For Marcoux it was third medal in Sochi, following his bronze finishes in the downhill and super G events.

"Today I have understood that you need to give it all in the two runs to win," said Gauthier-Manuel. "It is fine to think about technique and strategy, but to win is only about motivation."

Switzerland's Christoph Kunz grabbed gold in the sitting category. The 31-year-old managed to eliminate half-a-second gap to Corey Peters of New Zealand on the second run and clinched his second career Paralympic title.

"I am really happy. It was hard for me after the downhill and super combined," said Kunz, who was paralyzed in a motorbike accident. "I had a chance in giant slalom. The course was not in the best condition. We all had a hard week. I am happy I won a medal for Switzerland."

Peters' silver became the first medal at the Sochi Games for his country, as he finished 0.47 seconds behind Kunz.

Ahead of the closing ceremony Sunday evening, the last three Alpine skiing gold medals are on offer in the women’s giant slalom events, while six golds are up for grabs in cross-country skiing.

With 27 gold medals, Russia cannot be caught in the medal table. Germany is second with seven gold medals, while third-placed Ukraine and fourth-placed Canada have five apiece.