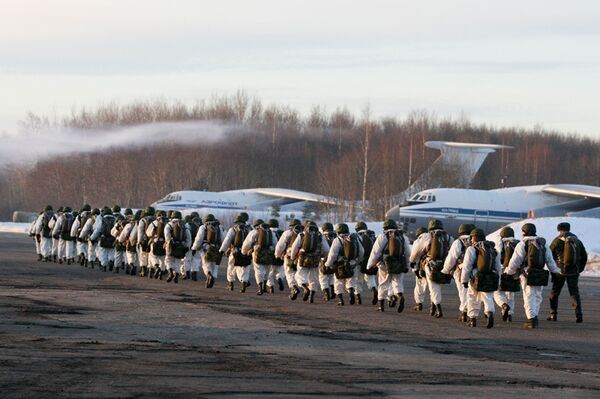 An airborne division based in central Russia began large-scale exercises Tuesday against the backdrop of an ongoing political and security crisis in Ukraine.

MOSCOW, March 11 (RIA Novosti) – An airborne division based in central Russia began large-scale exercises Tuesday against the backdrop of an ongoing political and security crisis in Ukraine.

The Defense Ministry said units of the 98th Guards Airborne Division, based in Ivanovo, a city east of Moscow, were put on high alert and moved to unspecified locations to “check readiness” in simulated combat conditions.

Four thousand troops, 36 military transport aircraft and an unspecified number of combat vehicles are taking part in the exercises, which will run until March 14.

The drills will include a massive simultaneous paradrop involving 3,500 servicemen, the ministry said.

The drills come in the wake of a number of military exercises in Russia’s western regions in the past days, including air defense drills, combat readiness snap checks and a launch of an intercontinental ballistic missile.

Russia says the exercises are not linked to the development in Crimea.

The turbulent political crisis gripping Ukraine has led to a standoff between Russia and the West over the fate of Crimea, an autonomous Ukrainian region with a narrow ethnic Russian majority.

Crimean authorities have refused to recognize the legitimacy of the new central government in Kiev, which was installed after the ouster of President Viktor Yanukovych in late February.

Local officials announced last week that they intended for the peninsula to become part of Russia.

A referendum on the issue has been set for March 16. Authorities in Kiev and international leaders have condemned the referendum as illegitimate.

Ukraine has lost control over Crimea in recent days as thousands of heavily armed troops without insignia and traveling in military vehicles with Russian plates swarmed the area, taking control of administration buildings and taking over military bases.

The Kremlin has denied the troops are Russian and has instead described them as “local militias.”