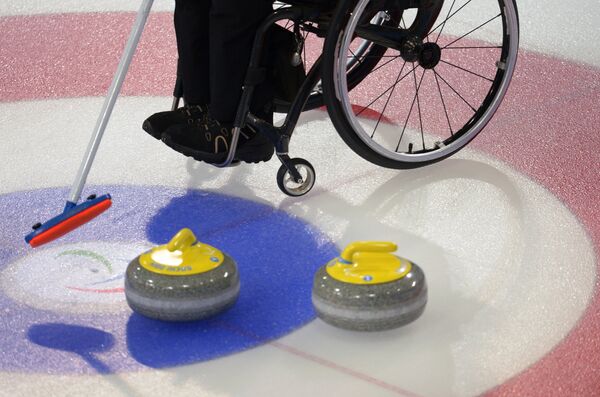 © RIA Novosti . Grigori Sysoev
/
Go to the photo bank
Subscribe
Slovakia's wheelchair curling team surprisingly stormed to the top of the Sochi Paralympics round robin table on the second day of the competition Sunday.

SOCHI, March 9 (R-Sport) – Slovakia's wheelchair curling team surprisingly stormed to the top of the Sochi Paralympics round robin table on the second day of the competition Sunday.

Radoslav Duris' team, who have never won a major medal, won both of their game games on Sunday, improving to a 3-0 record to share first place with reigning champion Canada, who defeated Sweden 7-4.

In the morning session, Slovakia destroyed China 8-3, before edging out Finland in a dramatic match, earning six points in the last two ends to win 9-6.

"It is unbelievable. Three games, three wins. I just can't believe it. In the last game we wanted to steal one more win and now we have stolen two," Duris said.

"After yesterday, we wanted to come out and get a couple of wins on the board and we were able to do that," Neilson said. "It shows that as a team we've worked really hard together, supported each other and have great dynamics."

In the wheelchair curling competition, mixed teams of men and women are mandatory. The final is March 15.