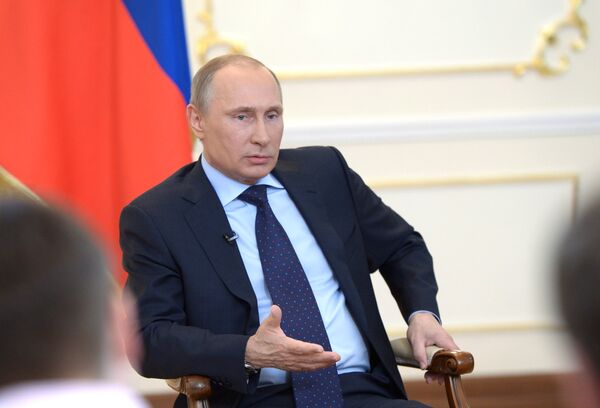 The remarks were the first public comments from Putin on the crisis in Ukraine since protesters in the capital, Kiev, swept to power last month.

Putin said Ukraine’s new government had no legal authority, and he urged new elections as soon as possible.

“The parliament is partially legitimate, but all the rest is not. The acting president does not have any legitimacy,” Putin told reporters.

While he denounced the Kiev authorities, Putin said Russia was not planning any imminent military action. “The use of troops is a last resort,” he said. “There is no necessity to do it at the moment, though that option is on the table.”

Any intervention would be purely humanitarian in nature, Putin said.

“If we take a decision to deploy troops then it will only be for the people’s protection,” he said. “Our militaries are brothers in arms, friends. I am sure that Ukrainian and Russian soldiers will be on the same side of the barricade.”

Troops under apparent Russian command, many of them traveling in military trucks and armored personnel carriers, have deployed widely around Crimea, as attested by numerous eyewitness accounts from reporters on the ground.

The troops have seized key strategic points across the peninsula, provoking a tense standoff with the Ukrainian military. Officials in Kiev and other capitals across the world have described the actions as an invasion.

Russia’s upper house of parliament, the Federation Council, approved on Saturday a request by Putin for the deployment of troops inside Ukraine.

While Putin said he did not agree with the methods of the protesters who overthrew Ukrainian President Viktor Yanukovych, he sympathized with some of their aspirations.

“Corruption had reached levels that we couldn't even imagine here, in Russia,” Putin said.

But he said that “an anti-constitutional coup and a military seizure of power” in Kiev had led to a situation inside Ukraine that was chaotic and out of control.

“We see the revelry of neo-Nazis, nationalists and anti-Semites that is currently going on in different parts of Ukraine,” Putin said.

He arrived in Russia shortly afterward and said Friday that he was still the legitimate president and will continue to fight to reassert his authority.

“While it is clear that he does not have any power, from a legal point of view the president of Ukraine is Yanukovych,” Putin said, who added that he did not feel any sympathy for the fallen leader whose private out-of-town mansions have been thrown open to curious Ukrainians in recent days.

Putin said he does not recognize his interim counterpart and would not work with Turchynov, though he had instructed the Russian government to establish contact with the new Ukrainian administration.

Russia committed last year to providing Ukraine with up to $15 billion of financial aid in the form of bond purchases, but Putin said this was unlikely to go ahead.

Instead, Putin said he was inclined to acquiesce to requests from officials in Europe and the United States who have asked Russia to work on a joint financial rescue package for Ukraine mediated through the International Monetary Fund.

But Putin warned that presidential elections in Ukraine – currently planned for May 25 – could not take place if the situation in the country does not improve.

“If they take place in conditions of such terror then, of course, we will not accept them,” Putin said.

Recast throughout and updated with more details, new headline, quotes and background