A senior Russian defense official said Thursday that the country’s Black Sea Fleet poses no threat to Ukraine and its activities are in compliance with standing agreements between the two countries.

MOSCOW, February 27 (RIA Novosti) – A senior Russian defense official said Thursday that the country’s Black Sea Fleet poses no threat to Ukraine and its activities are in compliance with standing agreements between the two countries.

“Currently all units are engaged in their daily routines, including combat training. These actions do not represent a threat,” Deputy Defense Minister Anatoly Antonov told reporters.

He added that the placement, strength and quantity of weapons and military personnel were in strict compliance with existing bilateral agreements.

The statement came hours after unidentified armed men seized the regional parliament in Ukraine’s Crimean Peninsula – where much of the Russian Black Sea Fleet is based – and reportedly raised a Russian flag over the building.

Pro-Russia citizen groups have been forming in the largely Russian-speaking Crimea amid the ongoing turbulence in the country. 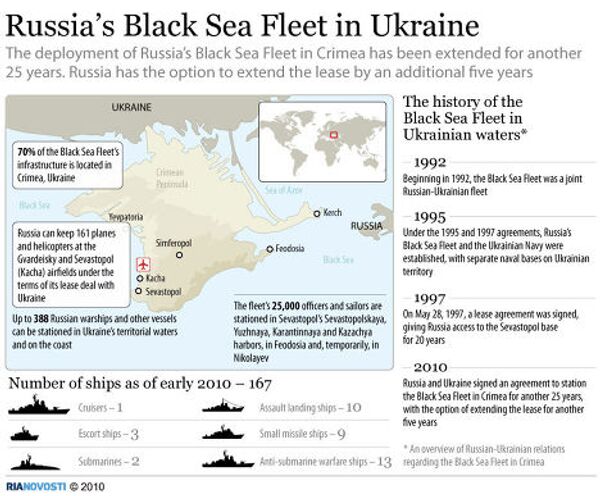 Moscow has insisted that it will not interfere in its neighbor’s affairs, but has expressed worry about discrimination against ethnic Russians in the region.

About half of Crimea’s population self-identifies as ethnic Russian.

Ukraine’s interim president warned Moscow on Thursday that any movement by Russian forces outside their bases would be interpreted as an act of military aggression.

The Russian Black Sea Fleet maintains its main naval base in the port of Sevastopol in addition to several auxiliary installations around the peninsula.

During the tenure of Ukrainian President Viktor Yanukovych, who fled the capital on Saturday, the country renewed Russia’s lease of the facilities through 2042.

Antonov said Russia would continue to pay Ukrainian citizens employed by the base and fulfill all financial obligations for the stay of the fleet in Crimea.