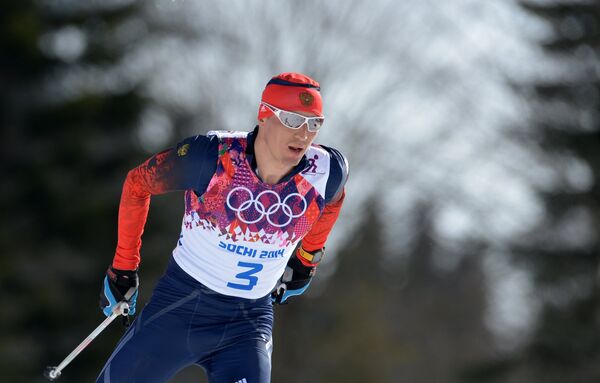 © RIA Novosti . Evgeny Biyatov
/
Go to the photo bank
Subscribe
Alexander Legkov led a Russian podium sweep Sunday at the cross-country skiing 50km freestyle race to put his country in an unassailable position at the top of the Sochi Olympic medal table.

SOCHI, February 23 (R-Sport) – Alexander Legkov led a Russian podium sweep Sunday at the cross-country skiing 50km freestyle race to put his country in an unassailable position at the top of the Sochi Olympic medal table.

With just two medal sets remaining, no other country can beat the Olympics hosts' tally of 12 golds, securing a first victory in the standings since Lillehammer 1994.

"This is priceless. It's more valuable than my life, I can't express how I feel. For 15 years I've been trying for this result," Legkov said.

At the Laura biathlon complex, Legkov beat Maxim Vylegzhanin by 0.7 seconds and Ilia Chernousov by 0.8 seconds in a breathtaking sprint finish.

Norway's Martin Johnsrud Sundby, who won bronze in the 30km skiathlon, was the only one in the finishing pack of four not to medal.

"I never expected to have such a success. We've repeated Norway's success yesterday with a Russian in first, second and third," Vylegzhanin said. "I'm happy to make people happy. Even though we've lost in the past, we've won now."

For Legkov it was a second Sochi medal: he was also a part of the silver-winning 4x10km relay team. Vylegzhanin won his third silver, following the relay and team sprint.

The Sochi Games are the most successful in Russian history by total medals won, with 32 in the bag. The country can still add to the haul as Alexander Zubkov's crew leads the four-man bobsled with one run remaining.