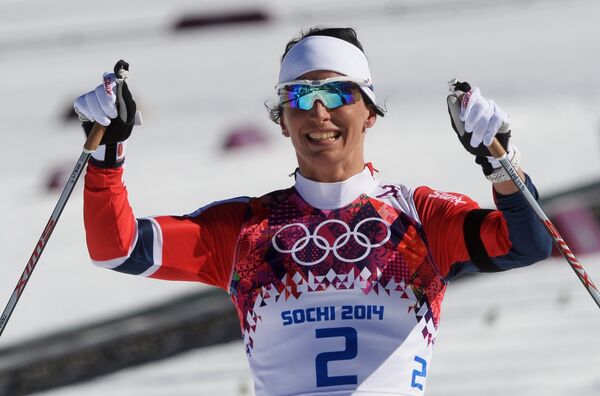 Bjoergen produced a decisive burst of pace on the last stretch to win by 1.8 seconds from Sweden’s Charlotte Kalla. Another Norwegian, Heidi Weng, took the bronze, 13.2 seconds off the lead.

"One gold was my goal, so now I can relax a little bit. I can enjoy the rest of the Games," Bjoergen said. "I knew Charlotte would be strong in the sprint and she's good at the climbs but I thought that if I could follow her, I would have a chance. I knew it would be a sprint. I did my best for the last 100m and I was sprinting very hard at the end."

It is the eighth career Olympic medal for Bjoergen, known as the "Iron Lady," and her fourth win, following a golden treble at the 2010 Olympics in Vancouver, making the 33-year-old Norway's most successful female Olympian.

"This is my dream ... I could not imagine this before the race," said Kalla, who won the 10km freestyle in Vancouver four years ago.

Until the last kilometer of Saturday's race, the medal-winning trio had been part of a five-woman breakaway with four-time world champion Therese Johaug of Norway and Finnish veteran Aino-Kaisa Saarinen, who finished fourth and fifth respectively.

The skiathlon is broken down into two stages of 7.5 kilometer, the first using the classical inline technique before skiers are allowed to switch to freestyle, with a motion similar to ice skating.

Earlier in the day, US snowboarder Sage Kotsenburg won the first gold medal of the Games in the men’s slopestyle.