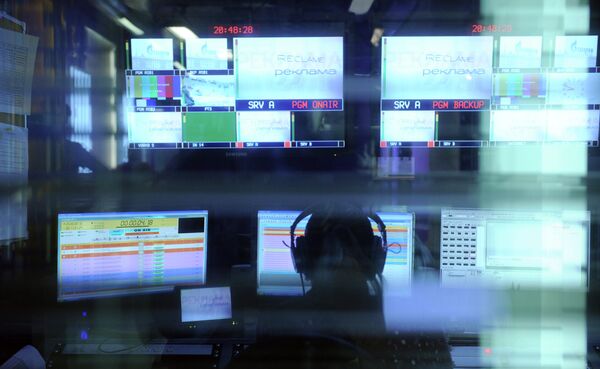 © RIA Novosti . Grigory Sysoev
/
Go to the mediabank
Subscribe
International
India
Africa
Staff of an online TV station in Russia face a threat of up to two years in prison after prosecutors announced an “extremism” investigation Thursday into an opinion poll concerning World War II.

MOSCOW, January 30 (RIA Novosti) – Staff of an online TV station in Russia face a threat of up to two years in prison after prosecutors announced an “extremism” investigation Thursday into an opinion poll concerning World War II.

The liberal Dozhd (“Rain”) channel triggered the ire of conservatives by asking on its website whether the Soviet Union should have surrendered the city of Leningrad to the Nazis to prevent mass deaths, rather than endure a 900-day siege.

Prosecutors in St. Petersburg – as Leningrad is now called – said on their website Thursday that they had launched a check into the channel. The inquiry would establish whether the channel had “overstepped all lines” with its “blasphemous” poll.

The emotional statement did not specify possible charges and the prosecutors’ press office did not return repeated calls for comment.

But Russian media cited a prosecution spokeswoman as saying that the channel was suspected of extremism, an accusation also levied earlier by lawmakers in St. Petersburg.

The controversy comes at a sensitive moment in Russia, which marked the 70th anniversary this week of the lifting of the siege in 1944. Leningrad lost between 600,000 and 1.5 million people from an estimated population of 2.5 million during the Nazi siege, which began in 1941.

A number of cable and satellite companies said Wednesday that they had ceased broadcasting of Dozhd. The head of Russia’s Cable Broadcaster Association acknowledged that the move was censorship.

Dozhd director Natalya Sindeyeva said Wednesday that the crackdown was Kremlin-orchestrated retribution for the channel’s reports about corrupt officials.

Dozhd was launched in 2010, during the presidency of Dmitry Medvedev, now prime minister, and is seen as a supporter of liberal viewpoints and politicians. It broadcast live coverage of anti-government protests in Moscow in 2011 and has reported extensively on the present crisis in Ukraine.

The Kremlin has not commented on Sindeyeva’s allegations, though presidential spokesman Dmitry Peskov accused the channel Wednesday of “crossing the line from a moral and ethical standpoint.” He said that he was expressing his personal opinion.

On Thursday, the Kremlin’s human rights council asked Russia’s telecom watchdog Roscomnadzor, the Federal Anti-Monopoly Service and the Prosecutor General to look into the legality of the move by cable and satellite TV providers.

“We are not judging the ethical side of the issue, because neither the ethical aspect nor the commercial aspect should affect the legal assessment,” said Mikhail Fedotov, the council’s head.

Extremism is a criminal offense in Russia, though the Venice Commission of the Council of Europe said in 2012 that the charge was overly vague and open to political abuse. Russian opposition claims the charge is routinely used against critics of the government.

Roscomnadzor said Thursday it plans no formal sanctions against Dozhd, but would send it a “prophylactic letter.”

Ironically, state-run Vesti-24 television faced accusations this week of “glorifying Nazism” when it included a line by Hitler’s propagandist Joseph Goebbels in a collection of “great men” quotes about Bolshevik leader Vladimir Lenin.

No officials or lawmakers demanded the closure of Vesti-24, however.

The question about the possible surrender of Leningrad featured in a state-approved history textbook for 9th graders from 2012 cited Thursday by Russian bloggers.

The same textbook notes that, according to Kriegsmarine commander Karl Dönitz, Hitler had planned to level the city to the ground.