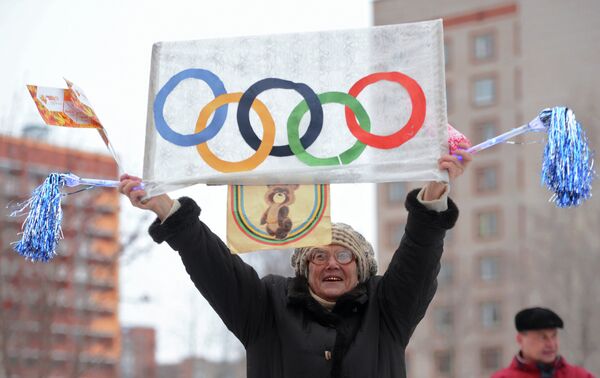 © RIA Novosti . Mikhail Voskresenski
/
Go to the photo bank
Subscribe
Sochi locals are being busily primed to break that old stereotype about Russians’ taciturn grumpiness during the upcoming Winter Olympics, but communication breakdowns may still be on the cards, despite everybody’s best efforts.

SOCHI, January 21 (Alexey Eremenko, RIA Novosti) – Sochi locals are being busily primed to break that old stereotype about Russians’ taciturn grumpiness during the upcoming Winter Olympics, but communication breakdowns may still be on the cards, despite everybody’s best efforts.

Still, Sochi City Hall advisor Olga Nedelko insists that while residents may not quite be up to chatting away in English by the time the Games come around, they will try their best to help.

“We’re talking about [residents] not being afraid when a tourist approaches them,” Nedelko said.

Sochi has little history of mass foreign tourism, meaning that it has never had much of an incentive to work on overcoming language and cultural barriers before winning the right to host the 2014 Winter Games.

Since then, city authorities and Games organizers have strived to make sure the million or so expected visitors can enjoy their stay without needing to master the notoriously fiendish intricacies of Russian grammar.

At the very least, getting around should not be a problem at the venues. Ability to speak some English was made a mandatory requirement for staff and the 25,000 volunteers, according to Sergei Cheremshanov, head of the Sochi Volunteer Center.

Every street sign between Sochi and Krasnaya Polyana, as well as direction pointers at the Olympic venues, have been dutifully rendered into English, allowing visitors to find their way not just to stadiums and skiing pistes, but even district administrations and local schools.

Results are largely satisfactory, but not without the occasional slip.

One shop sign for baby goods in the town of Adler, near Sochi, has been called “Happy Poops.” That prompted the head of Russian state-owned broadcaster RT, Margarita Simonyan, to quip on Twitter that locals may have embraced English with a little too much gusto.

While hundreds of officials, medics and other professionals have been sent for English classes, no translators will be hired by the city for the Olympics, Nedelko said.

A “word of the day” program carried through daily translations and usage examples on screens dotted around the city was designed in the hope of instilling knowledge of the language through osmosis.

Topics ranged from “where are you from” to handling cash machines and filing complaints at hotels. When RIA Novosti visited the City Hall on December 4, the word of the day was “taxy,” again hinting at a chasm between best intentions and outcome.

Even the city’s small host of 500 senior-age volunteers took English classes. They were even more intensive than those organized for officials, said Leonid Lyubimov, head of the Silver Age volunteer group.

Restaurateurs have likewise tried to ensure their staff are prepared.

Again, success has varied.  One of the ubiquitous cheap joints serving hearty Caucasian food seeks to lure visitors seeking refuge from the chill with the clunky promise of “here warmly.”

One restaurant at the other end of the price range in Krasnaya Polyana, venue of the mountain events, bears a sign warning curiously that it does “not serve FBI and CIA agents.” An unwarrantedly hostile note in what should be a welcoming international festival of sport, perhaps.

In general, the sound of English being spoken in cafes in Sochi did, as of last month, lead to an English-speaking waiter presenting themselves or an English-language menu being produced.

Cultural differences pose a similar potential for spoiling the enjoyment of the Sochi Games, especially for Western tourists.

Traditional Sochi hospitality involves what some might deem excess familiarity, down to friendly backslapping and pawing of potential customers being exhorted to employ taxi services or purchase fresh fir-cone jam by the kilogram.

Employees in the service industry typically adopt a sniffy attitude to customers – a leftover from the dour, non-market-driven Soviet era, when customers had to fight for service providers and not vice versa.

In a bid to address that, City Hall held politeness master classes for officials and other people involved in the Games.

A copy of the plan for the master class obtained by RIA Novosti issues pointers on etiquette, such as refraining from calling old women “crones” (“starukha” in Russian) and generally maintaining an air of “calm presence.”

“Nothing of the kind existed before the Olympics. Nobody needed it,” Nedelko said of the English and politeness programs.

“But now the city’s opening for independent [foreign] tourists,” she said.

Nedelko spoke in Russian throughout the interview, but demurred when asked to converse in English, alas.