Russian Military to Decide on Missile Deployment at NATO Borders 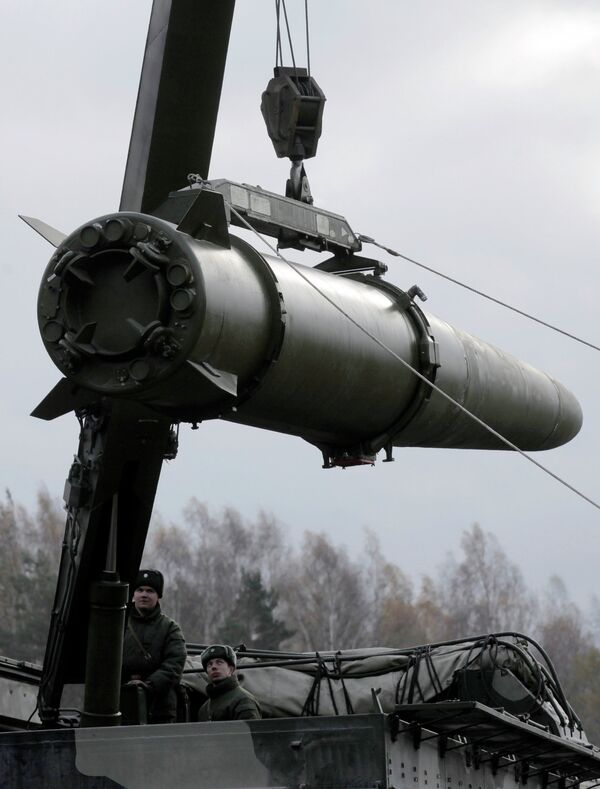 A decision on whether to deploy tactical ballistic missiles near borders with NATO countries will be made only following a threat assessment by the Russian military, Russia’s top diplomat said Friday.

MOSCOW, December 20 (RIA Novosti) – A decision on whether to deploy tactical ballistic missiles near borders with NATO countries will be made only following a threat assessment by the Russian military, Russia’s top diplomat said Friday.

“When such a necessity arises, it’s up to the military to decide,” Sergei Lavrov said in an interview with RIA Novosti.

Lavrov said that only professionals could provide a reliable assessment of the risks to Russia’s national security that would be posed by the European segment of the US global missile shield.

“That’s how the game is played. Nothing personal, so to speak,” the foreign minister said.

He reiterated, though, that the deployment of Iskander-M (SS-26 Stone) nuclear-capable missile systems near NATO borders could eventually be part of Russia’s response to NATO missile defense plans.

It was claimed in media reports over the weekend that at least 10 Iskander systems had been identified by satellite photos in Russia’s Baltic exclave of Kaliningrad and along its border with Baltic states and NATO members Estonia, Latvia and Lithuania.

However, President Vladimir Putin denied on Thursday the reported deployment of such Iskanders, saying the Russian leadership had not yet made such a decision.

The Russian Defense Ministry said in an ambiguously worded statement earlier this week that Iskander missiles had been stationed in Russia’s Western Military District, which includes Kaliningrad as well as much of the European part of Russia.

Following the statement, representatives of a number of NATO nations expressed concern that if true, the move would represent a deepening of tensions with Russia that could demand a NATO response. The United States said the move would be destabilizing to the region.

Polish authorities said Thursday, however, that the Iskander deployment reports had not been confirmed by the country’s military.