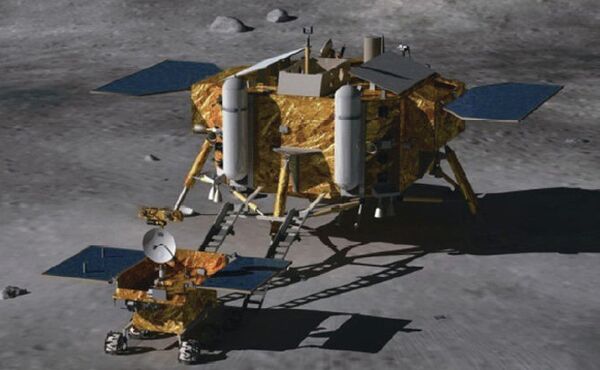 China on Saturday successfully carried out the world's first soft landing of a space probe on the moon in nearly four decades, state media said, the next stage in an ambitious space program that aims to eventually put a Chinese astronaut on the moon.

BEIJING, December 14 (Louise Watt, Associated Press) — China on Saturday successfully carried out the world's first soft landing of a space probe on the moon in nearly four decades, state media said, the next stage in an ambitious space program that aims to eventually put a Chinese astronaut on the moon.

The unmanned Chang'e 3 lander, named after a mythical Chinese goddess of the moon, touched down on Earth's nearest neighbor following a 12-minute landing process.

The probe carried a six-wheeled moon rover called "Yutu," or "Jade Rabbit," the goddess' pet. After landing Saturday evening on a fairly flat, Earth-facing part of the moon, the rover was slated to separate from the Chang'e eight hours later and embark on a three-month scientific exploration.

China's space program is an enormous source of pride for the country, the third to carry out a lunar soft landing — which does not damage the craft and the equipment it carries — after the United States and the former Soviet Union. The last one was by the Soviet Union in 1976.

"It's still a significant technological challenge to land on another world," said Peter Bond, consultant editor for Jane's Space Systems and Industry. "Especially somewhere like the moon, which doesn't have an atmosphere so you can't use parachutes or anything like that. You have to use rocket motors for the descent and you have to make sure you go down at the right angle and the right rate of descent and you don't end up in a crater on top of a large rock."

State-run China Central Television showed a computer-generated image of the Chang'e 3 lander's path as it approached the surface of the moon, saying that during the 12-minute landing period it needed to have no contact with Earth. As it was just hundreds of meters (yards) away, the lander's camera broadcast images of the moon's surface.

The Chang'e 3's solar panels, which are used to absorb sunlight to generate power, opened soon after the landing. The Chang'e 3 will set up antennae that will transmit pictures back to Earth.

The Chang'e mission blasted off from southwest China on Dec. 2 on a Long March-3B carrier rocket.

China's military-backed space program has made methodical progress in a relatively short time, although it lags far behind the United States and Russia in technology and experience.

China sent its first astronaut into space in 2003, becoming the third nation after Russia and the United States to achieve manned space travel independently. In 2006, it sent its first probe to the moon. China plans to open a space station around 2020 and send an astronaut to the moon after that.

"They are taking their time with getting to know about how to fly humans into space, how to build space stations ... how to explore the solar system, especially the moon and Mars," Bond said. "They are making good strides, and I think over the next 10, 20 years they'll certainly be rivaling Russia and America in this area and maybe overtaking them in some areas."