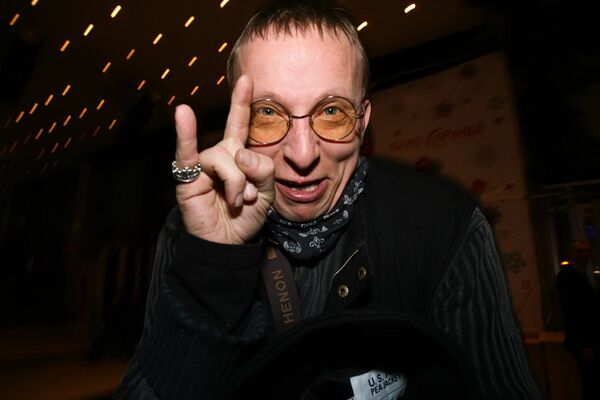 © RIA Novosti . Valery Levitin
Subscribe
International
India
Africa
A star in Russia’s popular answer to US medical sitcom “Scrubs” has added to a mounting mood of homophobia in the country by saying he wants to burn gay people alive as they pose a danger to his children.

MOSCOW, December 13 (RIA Novosti) – A star in Russia’s popular answer to US medical sitcom “Scrubs” has added to a mounting mood of homophobia in the country by saying he wants to burn gay people alive as they pose a danger to his children.

“I’d put them all alive in the oven… it’s a living danger to my children,” Ivan Okhlobystin said at a chat with fans in the Siberian city of Novosibirsk.

Local news website News.ngs.ru reported Wednesday that Okhlobystin, a father of six, ranted about “gay fascism” and demanded that “faggots” be stripped of their voting rights as homosexuality is a “psychical anomaly.”

The 47-year-old actor, one of Russia’s most extravagant media personalities, served as an Orthodox Christian priest as well as acting until his priesthood was suspended in 2010.

Okhlobystin, a chief ideologue at the Kremlin-linked Right Cause party, made a short-lived bid for the presidency in 2011. In previous public remarks, he pledged to use proceedings from an upcoming book to buy arms for the besieged regime in Syria.

Okhlobystin has about 50 entries in his filmography, including 2001 movie “DownHouse,” a psychedelic retelling of Fyodor Dostoyevsky’s “Idiot.”

He is best known for “Interns,” a sitcom directly inspired by “Scrubs.” Although the show’s producers describe the show as an original creation, Okhlobystin’s perennially misanthropic doctor is a clear copy of a character in “Scrubs.”

Anti-gay sentiment is on the rise in Russia. Rights activists say legislation approved last year to ban the promotion of homosexuality among minors has fueled a climate of intolerance toward the gay, lesbian, bisexual and transgender community.

Prominent television presenter Dmitry Kiselyov, who was this week appointed by the Kremlin to head a news agency that is set to replace RIA Novosti, called in 2012 to “burn or bury the hearts of gays” that die in car crashes.

He did stop short of promoting actually burning gay people alive, as Okhlobystin has done, however.