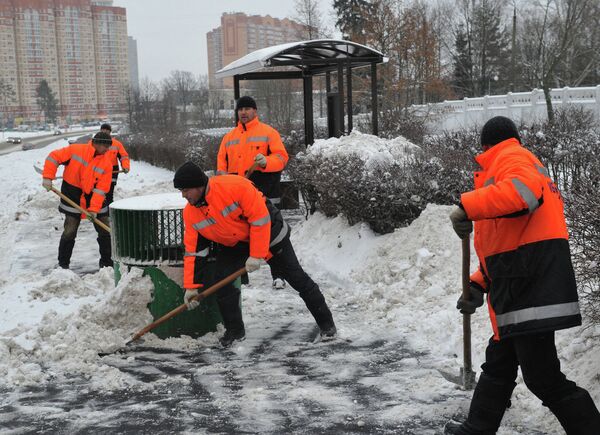 © RIA Novosti . Alexey Kudenko
/
Go to the photo bank
Subscribe
Communication in a language other than Russian at work could soon be banned under a bill proposed by two lawmakers from Russia’s nationalist LDPR party.

MOSCOW, December 12 (RIA Novosti) – Communication in a language other than Russian at work could soon be banned under a bill proposed by two lawmakers from Russia’s nationalist LDPR party.

Foreigners working in the country often don’t speak Russian, which can lead to problems in their place of employment, deputies Yan Zelinsky and Yelena Afanasyeva said Thursday.

“They [foreign citizens] talk among themselves in their native language at work during work hours, which fills the indigenous population with resentment,” the deputies said.

The bill would ban the use of foreign languages at work by foreigners or stateless people working in Russia under contract, obliging them instead to speak Russian or the official language of the region.

Russian is the only nationally recognized official language, though over two dozen co-official tongues are acknowledged in the country’s multiethnic republics.

The lawmakers did not specify if the law would apply to written communication as well as speech, or how it would affect people working at non-Russian companies or in overseas-focused enterprises, such as foreign-language news agencies.

Interethnic tension has swelled in recent years alongside a massive influx of foreign workers into Russia.

According to an October survey by the independent Levada Center pollster, 66 percent of Russians agreed to some extent with the idea of "Russia for Russians," up from 55 percent in 2002.

Levada Center director Lev Gudkov told Radio Svoboda, the Russian language service of US Congress-funded Radio Free Europe/Radio Liberty, in November that based on the center’s research, he estimated that 70 to 80 percent of Russians were in some way xenophobic.