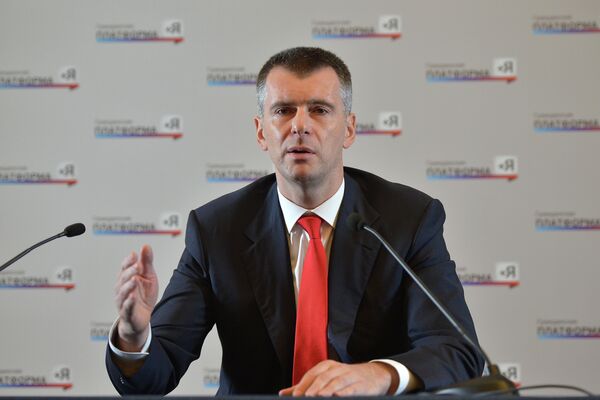 © RIA Novosti . Ramil Sitdikov
/
Go to the photo bank
Subscribe
Russian billionaire-turned-politician Mikhail Prokhorov’s mining company has agreed to snap up a Canadian copper producer in a $100 million deal requiring the listing of the new firm’s shares in Toronto, the companies announced Thursday.

Intergeo MMC, a mining company controlled by Prokhorov’s Onexim Group, has acquired Vancouver-based Mercator Minerals and will hold an 85 percent ownership stake in the new company, which will be named Intergeo Mining, Onexim and Mercator said.

“We are very excited about the potential of Intergeo Mining,” Onexim chief executive Dmitry Razumo said in a statement. “The combined company will be led by a team of professionals with unique experience in managing metals and mining companies internationally.”

Prokhorov will invest $100 million in the new company as part of the deal, which is conditional upon Intergeo Mining's listing on the Toronto Stock Exchange, according to a statement issued Thursday by Mercator.

Prokhorov, 48, made his fortune in metals, banking and an array of investments. Forbes Russia estimated his net worth this year at $13 billion.

His most high-profile move into North American was his 2010 purchase of the New Jersey Nets of the National Basketball Association, a team he relocated to Brooklyn, which has a large Russian-speaking population.

Prokhorov entered into Russian politics in 2011, unsuccessfully attempting to participate in the parliamentary elections. He also squared off against Vladimir Putin in last year’s presidential race, finishing third with about 8 percent of the vote.