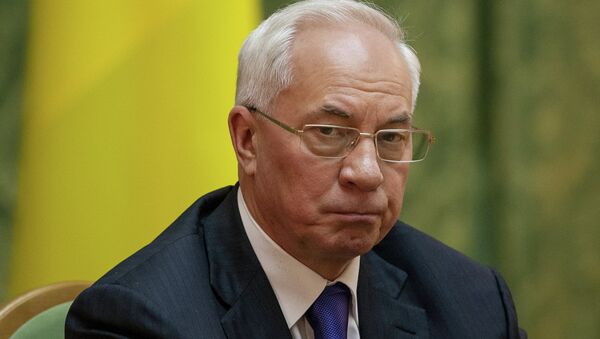 Ukraine’s prime minister said late Friday that his country’s snap decision not to pursue closer economic ties with Europe did not mean it would instead seek entry into the Moscow-led Customs Union trade bloc.

KIEV, November 23 (RIA Novosti) – Ukraine’s prime minister said late Friday that his country’s snap decision not to pursue closer economic ties with Europe did not mean it would instead seek entry into the Moscow-led Customs Union trade bloc.

Ukraine’s government stunned European officials this week by announcing that it was suspending preparations for EU association agreements that had been due to be concluded in a matter of days in favor of reviving the relationship with Russia.

The move has been widely read as a victorious outcome for the Kremlin and its efforts to keep its former Soviet neighbor within its economic orbit.

Claims that Moscow had strong-armed Kiev into backing away from the EU deal appeared to gain additional credence after an aide to Lithuania’s head of state said Friday that Ukrainian President Viktor Yanukovych had complained of Russia using trade embargoes as a form of pressure.

But Ukrainian Prime Minister Azarov dismissed those claims, saying the aide had liberally interpreted Yanukovych’s conversation with his Lithuanian counterpart.

“I don’t think that our president talked about [Russian blackmail]. I am 100 percent of that,” Azarov told Ukrainian television station Inter on Friday evening.

Azarov downplayed suggestions that mending long-strained links with Russia was a precursor to Ukraine entering the Customs Union, a fledgling economic bloc that currently also comprises Belarus and Kazakhstan.

“Since we decline to sign [the EU association agreement], it follows that we want to join the Customs Union. Who says?” Azarov said.

Russia has been openly lobbying for other economically struggling former Soviet nations, such as Armenia and Kyrgyzstan, to join the Customs Union, which some view as an exercise by Moscow at reasserting regional influence.

But Ukraine has in recent years played it cool over such initiatives, viewing them as an attempt to undermine its sovereignty.

In the near term, however, Ukraine must content with the realities of dependence on Russia. Azarov ruefully remarked earlier this week that his country had already registered significant losses because of shrinking trade with Russia and other members of the Moscow-led post-Soviet alliance, the Commonwealth of Independent States.

“Trade turnover grew significantly in 2012, but in 2013 we have lost nearly one-quarter of our trade turnover with CIS markets,” Azarov said. “Those economic losses are significant for us, and Ukraine has been facing serious [financial] hardships lately."

Even though Russian President Vladimir Putin as recently as Friday insisted that no pressure was being applied to Ukraine, Kremlin officials have openly threatened Ukraine in the past that an EU trade deal would preface trade embargoes.

The issue of Russian-Ukrainian relations is further complicated by the internal politics of Ukraine, where the largely ethnic Russian population in the east favors retaining stronger links with Moscow. Those regions form Yanukovych’s political base.

Tymoshenko, who had two stints as prime minister under a previous president between 2005 and 2010, has become a central figure in the ongoing political and diplomatic drama.

In 2011, she was sentenced to seven years in jail on charges of abusing her office as prime minister for a contentious natural gas deal with Russia. She maintains the case against her is politically motivated.

Since May 2012, she has been receiving treatment for severe back problems that medical experts say will require her to seek hospitalization abroad.

Yanukovych has long resisted growing calls for her release, including those from the EU, which had said that satisfactory settlement of the Tymoshenko issue was an unavoidable precondition for the trade deal that Kiev seemed eager to conclude.

Yanukovych appeared to relent recently by suggesting that parliament could consider legislation allowing convicts to go abroad for treatment unavailable in Ukraine.

The draft legislation was duly drawn up, only for progress to be held up by bickering in Ukraine’s notoriously fractious parliament, where Yanukovych’s Party of Regions and its allies hold the majority.

The law appeared to definitively hit the buffers on Thursday, only hours before the Cabinet announced its withdrawal from the EU association agreement.