Russian Teenager to Drive for Formula One Team 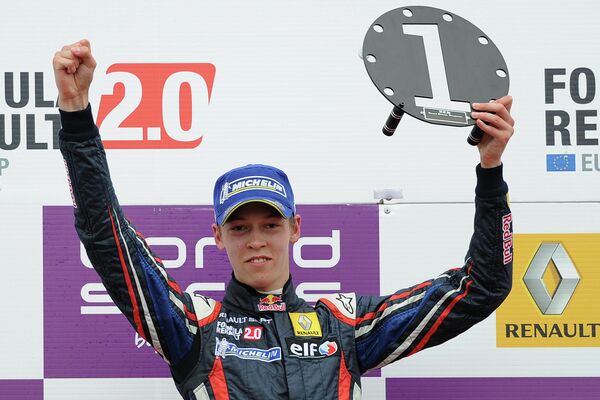 © RIA Novosti . Alexei Filippov
/
Go to the mediabank
Subscribe
International
India
Africa
Russian youngster Daniil Kvyat has been cleared to drive for his new Formula One team Toro Rosso after getting the required FIA super license, the team said Monday.

MOSCOW, November 11 (R-Sport) – Russian youngster Daniil Kvyat has been cleared to drive for his new Formula One team Toro Rosso after getting the required FIA super license, the team said Monday.

Kvyat, 19, is the newly crowned champion of the junior GP3 series and will race for Toro Rosso next year as a replacement for Daniel Ricciardo, who is leaving the team for Red Bull.

His new license means he will drive in Friday practice at the Circuit of the Americas near Austin, Texas, this week and the season finale at the Interlagos track in Sao Paulo later this month.

Kvyat has now “qualified for the necessary paperwork required by the FIA for him to compete in Formula 1,” Toro Rosso said in a website statement.

The requirements for a super license are strong finishing in junior series as well as at least 300 kilometers of running in an older-specification F1 car, something Kvyat completed Friday at Italy’s Misano circuit.

Kvyat suggested his practice at Misano could come in useful despite the older-spec STR6 he drove, telling the Autosport website that “all the machinery from the last three years is pretty much similar” and that “the difference isn’t that great” when compared with the new-spec machines to be introduced when regulations change for next year.

Testing in F1 is strictly regulated to keep costs down and new drivers can typically only gain experience in current cars in Friday practice sessions or at special young drivers’ tests, at one of which Kvyat impressed for Toro Rosso in June.

The other Russian set to debut in F1 next year, 18-year-old Sergei Sirotkin, has yet to obtain a super license. His team, Sauber, is trying to obtain a license for him despite his results in junior categories not filling the criteria set out by the FIA.