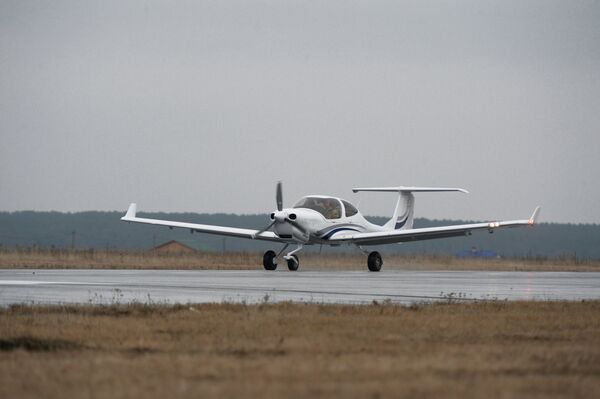 The first Austrian-designed DA40 trainer plane assembled in Russia took to the skies on its maiden flight Monday at the Ural Works of Civil Aviation.

YEKATERINBURG, November 11 (RIA Novosti) – The first Austrian-designed DA40 trainer plane assembled in Russia took to the skies on its maiden flight Monday at the Ural Works of Civil Aviation.

The Diamond DA40 is an Austrian four-seat, single engine, light aircraft constructed from composite materials. The plane has a very low accident record, particularly with regard to stall and spin accidents, and is widely used for basic pilot training.

The trainers are being assembled at the Ural region plant under an initial contract with Austria’s Diamond Aircraft Industries for 117 planes in 2013-2014. Future plans include full-cycle production of the aircraft in Russia, according to the Industry and Trade Ministry.

“The key goal is to set up a 100 percent localized production of Diamond DA40 planes in Russia by 2016,” Trade Minister Denis Manturov said at the presentation of the first batch of DA40 planes assembled at UWCA.

The minister said Russian civil aviation has an estimated demand for about 600 DA40 planes, which could be used for a variety of missions, including fire-fightinga and short-distance passenger and cargo transportation in Russia’s remote regions in the Arctic and the Far East.

The UWCA is part of Oboronprom, a subsidiary of state corporation Rostec, which comprises more than 663 companies merged in eight defense and five civil-industry holdings.