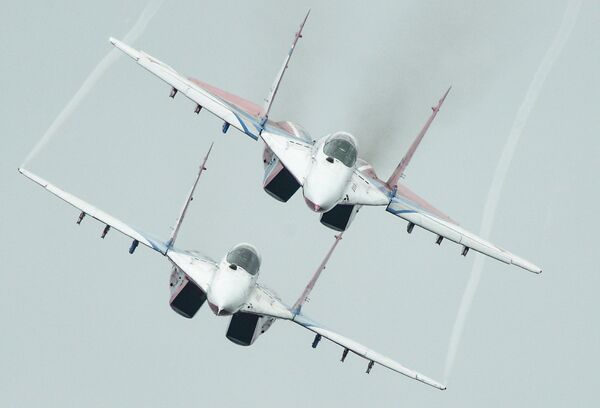 CAIRO, November 7 (RIA Novosti) – Egypt is considering spending up to $4 billion on advanced weaponry from Russia following the partial suspension of military aid and equipment deliveries from the United States, a Palestinian online newspaper said Thursday.

According to Donia Al-Watan, Moscow has offered Cairo “a historic deal giving Egypt an option to buy the most advanced weaponry without any restrictions.”

The report comes on the eve of a visit to Egypt by a Russian military delegation led by Defense Minister Sergei Shoigu. A source in the Russian Defense Ministry told RIA Novosti on Thursday that the delegation would visit Serbia and Egypt on November 12-15.

The source said the Russian delegation would include the first deputy director of the Federal Service on Military-Technical Cooperation, Andrei Boitsov, and officials from state-arms exporter Rosoboronexport.

The visit has been preempted by a bout of shuttle diplomacy between Moscow and Cairo with exchanges of unofficial visits and behind-closed-doors discussions in the past few weeks.

Rumors about Egypt turning toward Russia for military assistance to meet its security needs have been circulating in the media since last week and intensified around a recent visit to Egypt by US Secretary of State John Kerry, which has been widely considered an attempt to mend weakening bilateral ties and prevent potential military deals with Russia.

The Obama administration announced on October 9 that it had decided to “hold the delivery of certain large-scale military systems and cash assistance to the [Egyptian] government pending credible progress toward an inclusive, democratically elected civilian government through free and fair elections.”

The announcement, as well as the US backing of deposed President Mohammed Morsi, has angered the current Egyptian authorities, prompting interim Foreign Minister Nabil Fahmy to call US-Egyptian relations “turbulent” and “unsettled.”

Sources cited by Donia Al-Watan said Kerry had offered Egypt to restore all elements of the military aid, worth 1.5 billion annually, and “bring bilateral relations to the previous level,” but Egyptian Defense Minister Abdel Fattah el-Sisi rejected all US proposals.

For Moscow, the renewal of military ties with Egypt could signify a return in force to the Middle East while US diplomacy is failing all over the region.

The Soviet Union and Egypt enjoyed close ties during the 1960s and early 1970s, when the Arab country was led by Abdel Nasser. But within years after the death of Nasser, the new president Anwar Sadat started reorienting the country toward the West and expelled about 20,000 Russian military advisers stationed in Egypt in July 1972. Bilateral relations have since never warmed up to the previous friendship level.