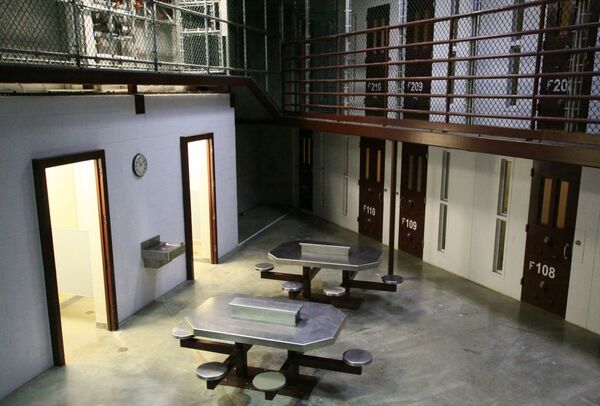 US military and intelligence agencies pressed doctors and psychologists to violate medical ethics by directing them to engage in “torture” of detainees amid US counterterrorism efforts, medical and legal experts said in a report released Monday.

WASHINGTON, November 4 (RIA Novosti) – US military and intelligence agencies pressed doctors and psychologists to violate medical ethics by directing them to engage in “torture” of detainees amid US counterterrorism efforts, medical and legal experts said in a report released Monday.

“Physicians were transformed into agents of the military and performed acts that were contrary to medical ethics and practice,” Dr. Gerald Thomson, professor of medicine emeritus at Columbia University and a member of the task force that issued the report, said in a statement.

The report is the result of a two-year study by a 19-member task force backed by the Institute on Medicine as a Profession (IMAP), a nonprofit health care policy organization based at Columbia University in New York, and the Open Society Foundations funded by billionaire financier George Soros.

The task force found that since the Sept. 11, 2001, terrorist attacks, the Pentagon and the US Central Intelligence Agency (CIA) directed doctors at facilities like the US military detention center at Guantanamo Bay, Cuba, to engage in practices that included “designing, participating in and enabling torture and cruel, inhumane and degrading treatment of detainees.”

“We have a responsibility to make sure this never happens again,” Thomson said in Monday’s statement accompanying the release of the report.

The experts said the CIA’s Office of Medical Services was critical in approving practices widely seen as torture, including waterboarding, as medically acceptable.

“Putting on a uniform does not and should not abrogate the fundamental principles of medical professionalism,” IMAP president David Rothman said in Monday’s statement “‘Do no harm’ and ‘put patient interest first’ must apply to all physicians regardless of where they practice.”

Pentagon spokesman Todd Breasseale told CNN on Monday that the allegations in the report are not new and that the claims are unsupported.