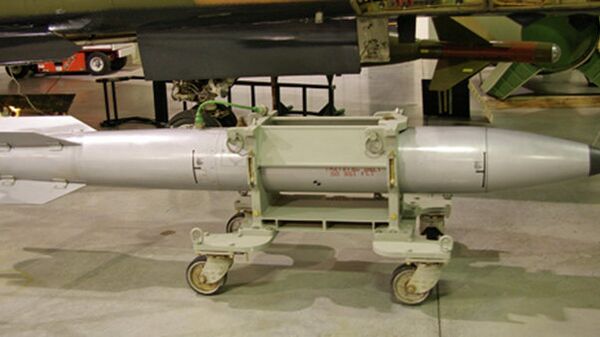 A key bomb in the United States’ nuclear arsenal is being upgraded with precision guidance equipment and safety mechanisms, even as officials say budget battles threaten funding they call critical to US nuclear deterrence.

WASHINGTON, October 30 (RIA Novosti) – A key bomb in the United States’ nuclear arsenal is being upgraded with precision guidance equipment and safety mechanisms, even as officials say budget battles threaten funding they call critical to US nuclear deterrence.

“It is the right course of action to cost-effectively extend the life of our weapons, modernize our infrastructure and preserve our deterrent capability,” C. Robert Kehler, commander of the US Strategic Command, told lawmakers at a Capitol Hill hearing Tuesday, the Albuquerque Journal reported.

Kehler and other officials told the House Armed Services Subcommittee on Strategic Forces that the B-61, the oldest nuclear bomb in the US arsenal, is being modernized with a precision-guidance kit that will replace a parachute used to slow the weapons descent, the Washington Free Beacon reported Wednesday.

The upgrade entails combining four 1960s-era variants of the B-61 into a single bomb, the Free Beacon cited the officials as saying. The United States maintains around 400 B-61 bombs, some 200 of which are deployed in Europe, according to the report.

Officials also told lawmakers they are concerned about budgetary belt-tightening that could negatively impact the state of the US nuclear arsenal, including a so-called “life extension program” to repair and replace components of nuclear weapons.

“Today, the most significant risk the program faces is not technical risk, but uncertainty of consistent funding,” Donald Cook, deputy administrator for defense programs with the US National Nuclear Security Administration (NNSA), said in a prepared statement for the hearing.

Some members of the US Congress consider the life-extension program too costly and potentially unnecessary, the Albuquerque Journal reported.

“I’m concerned about the cost and complexity of the current plan and whether [the B61 bombs] are needed long term,” US Rep. John Garamendi, a Democrat from California, said during the hearing, the Journal reported.

The NNSA estimates the cost of refurbishing the B-61 at $8.1 billion over 12 years, and US President Barack Obama earlier this year asked Congress to increase the budget for the bomb to $537 million in 2014, up from $369 million this year, according to the Journal.

Federal budget battles, however, resulted in a $30 million cut to the life-extension budget this year, prompting NNSA officials to mobilize nearly $250 million in reserve funds in preparation for possible additional costs later on, according to the report.

Under the New START treaty signed between the United States and Russia in 2010, each side is allowed a maximum of 1,550 warheads and no more than 700 deployed launchers.

Obama said earlier this year that he intended to seek negotiated cuts with Russia beyond those benchmarks, though Russian officials have expressed doubts about the proposal in light of US global missile defense plans and attempts by other counties to boost their nuclear arsenals.