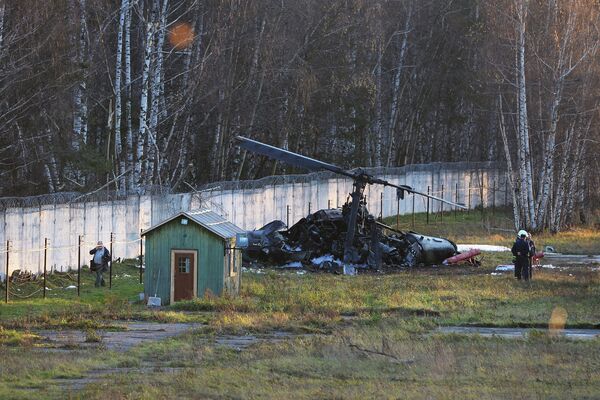 © RIA Novosti . Vladimir Pesnya
Subscribe
A Russian military helicopter crashed Tuesday afternoon in a district on the edge of Moscow, injuring the two pilots on board.

MOSCOW, October 29 (RIA Novosti) – A Russian military helicopter crashed Tuesday afternoon in a district on the edge of Moscow, injuring the two pilots on board.

A law enforcement official told RIA Novosti the ejection seats on the twin-seat Kamov KA-52 Alligator attack helicopter activated inadvertently, sending it crashing to the ground near the Vykhino-Zhulebino district in southeast Moscow.

This is the second time in two years that a KA-52 helicopter has crashed.

A clearer account of the causes behind Tuesday’s accident is expected to emerge as investigators study the crash site.
“All the circumstances of what took place are being established,” the Investigative Committee said.

Investigators said they will check whether there are grounds for legal action.

Tatyana Morozova, a spokeswoman for Moscow’s Inter-Regional Transport Investigations Directorate, said a technical glitch and pilot error were being investigated as possible causes of the crash.

“Investigators have seized pre-flight papers and other technical documents. Investigators will speak to the pilots soon,” she said.

The helicopter’s flight data recorder has also been recovered.

According to Morozova, the flight was performed to test a new air conditioning system.

An Emergency Situations Ministry official said that flames caused by the crash spread across an area of 20 square meters.

A city health services spokeswoman said the two pilots were in shock, but conscious. 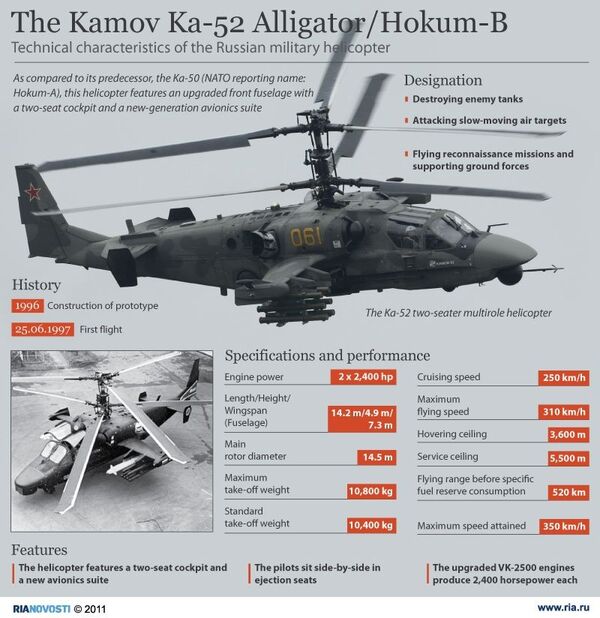 “Doctors have assessed their condition as serious, but they believe there is a chance they will be saved,” the spokeswoman said.

She told RIA Novosti that the pilots had sustained multiple injuries to their bodies, including to the head, chest and spine.

Eyewitnesses told RIA Novosti that they saw the helicopter hit a concrete barrier as it fell and that several explosions took place.

Two pilots died in March 2012 after their KA-52 helicopter crashed during a training flight near the Torzhok military helicopter testing and training center in the Tver Region.

There have been previous accidents involving the single-seat Ka-50, from which the Ka-52 is derived.

A Ka-50 crashed in June 1998 during an air display, killing the base commander at Torzhok. An official accident report said the helicopter's co-axial rotor blades had collided during hard maneuvering.

The Ka-50 and Ka-52 are unique among helicopters in having ejection seats. The seats operate after explosives in the rotor head blow off the rotor blades to allow the crew to be ejected safely.

The Ka-52 was displayed for the first time on an international platform at the 50th Le Bourget airshow in June.