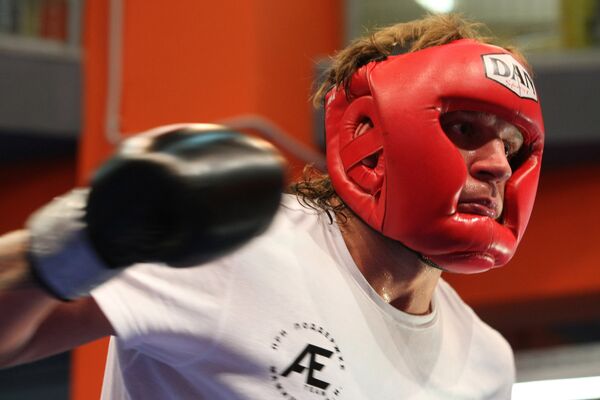 © RIA Novosti . Igor Samoilov
/
Go to the mediabank
Subscribe
International
India
Africa
Promoter company Legend has terminated its contract with Russian mixed martial arts star Alexander Emelianenko, just a day after the fighter was detained for allegedly beating up a man in a Moscow cafe.

MOSCOW, October 25 (R-Sport) – Promoter company Legend has terminated its contract with Russian mixed martial arts star Alexander Emelianenko, just a day after the fighter was detained for allegedly beating up a man in a Moscow cafe.

“I confirm the decision of the Legend promoter company to tear up a contract with Alexander once, and probably, for all,” company head Ruslan Suleymanov told R-Sport.

Suleymanov said the decision was not connected with the café fight incident, but was because Emelianenko was "unprofessional" and unprepared for a bout against Croatian fighter Mirko Filipovic on November 8.

The 31-year-old Emelianenko has consequently been removed from the card and the bout cancelled. He was knocked out by Filipovic at the start of his career in 2004. A new opponent for Filipovic should be announced later.

“This scandal Alexander is involved in right now didn’t influence our decision. We just came to the understanding that he is prepared neither physically nor mentally for the fight.”

Suleymanov added he met Emelianenko on Thursday, when the fighter was completely demoralized.

A man was hospitalized with multiple injuries Wednesday after a brawl in a cafe in southeastern Moscow, the police said. Emelianenko was later taken in for questioning but released after filing a counter-claim stating he was only defending himself.

It is not the first time Emelianenko has had a brush with the law. He was fined by a Siberian court last year for disorderly conduct on board a commercial flight, and was questioned by police in August over the alleged rape of a 23-year-old woman. The alleged victim later retracted her claims against him.

After the airplane incident, he retired stating he had too many injuries but returned into the sport in March following a three-month stay in a Greek monastery.

Emelianenko is a renowned MMA fighter with a 23-6 career win-loss record and is the younger brother of former MMA champion Fedor Emelianenko.