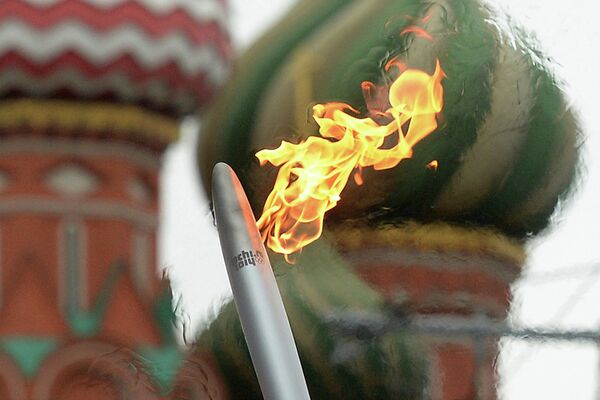 © RIA Novosti . Alexei Filippov
/
Go to the photo bank
Subscribe
The Olympic flame for next year's Winter Games in Sochi has arrived at the North Pole, the head of the organizing committee has said.

MOSCOW, October 20 (R-Sport) – The Olympic flame for next year's Winter Games in Sochi has arrived at the North Pole, the head of the organizing committee has said.

Sending the flame to the North Pole for the first time is one of a series of spectacular journeys running alongside the torch relay - others include sending an unlit torch into space, and taking the flame up Russia's highest mountain.

The flame was transported to the North Pole on a nuclear-powered icebreaker that left the Russian port of Murmansk on Tuesday.

The appearance of the torch at the Pole comes at a time when the Arctic has become a political priority for President Vladimir Putin, who is keen to exert Russian sovereignty over a vast area of the region and has spoken of developing it for the oil and gas industries. The geographic North Pole is located at sea, near a seasonal Russian research base.

Meanwhile on the main torch relay, the Olympic flame is covering Russia's so-called Golden Ring of historic cities around Moscow, taking in Suzdal, Vladimir and Yaroslavl.

The flame will soon head to St. Petersburg before being flown to Russia’s Far East and eventually looping around the Kamchatka Peninsula, down to Vladivostok and back across southern Siberia via Lake Baikal, the world’s largest freshwater lake.

On its way through all of Russia’s 83 regions, the flame will make its way back into European Russia, winding down through the Caucasus to the Black Sea resort of Sochi for the opening ceremony.

The space theme is to recur throughout the relay, with an unlit torch to be used at the opening ceremony blasting off for the International Space Station next month.