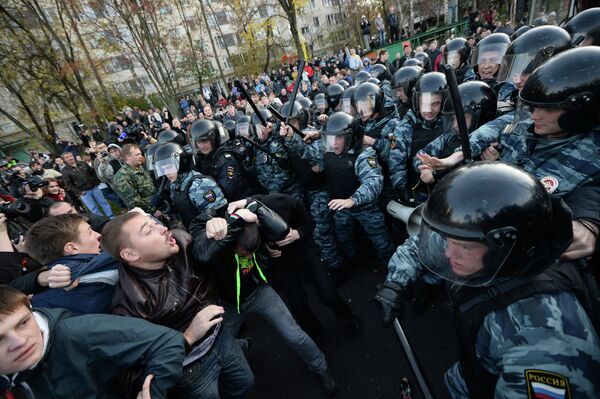 © RIA Novosti . Maxim Blinov
/
Go to the photo bank
Subscribe
Radical nationalism is on the rise in Russia, xenophobia is still widespread and more measures should be taken to address the problem, the Council of Europe’s anti-racism commission said Tuesday in its fourth report focusing on Russia.

MOSCOW, October 15 (RIA Novosti) – Radical nationalism is on the rise in Russia, xenophobia is still widespread and more measures should be taken to address the problem, the Council of Europe’s anti-racism commission said Tuesday in its fourth report focusing on Russia.

The European Commission against Racism and Intolerance (ECRI), a human rights monitoring body, said in its study published in Strasbourg on Tuesday that Russian authorities have made a number of positive steps in order to tackle issues of concern, but the situation can and must be further improved.

According to the paper, the country's residence registration system has posed significant problems for non-Russians in getting access to basic social services, while ultranationalist, racist and neo-Nazi websites are rife on the Internet.

“Anti-discrimination legislation is sector-based and is rarely applied. No independent body specialized in combating racism and racial discrimination has been set up,” the organization said in its report, which covers the five-year period between January 2008 and December 2012.

The report mentions numerous violations of labor regulations and basic rights of migrants, many of whom have difficulties in obtaining legal status.

The study indicated that radical nationalism is on the rise, while there is a high incidence of racist violence, directed predominantly against persons of “non-Slavic appearance,” especially those originating from Russia’s North Caucasus region and from Central Asia.

Russia hosts the world’s largest population of migrants after the United States, with 11 million people, according to the United Nations. In addition to foreign migrants, pro-nationalist groups frequently target natives from Russia’s predominantly Muslim regions.

In its report, the European commission also recommended that Russian authorities “provide for appropriate sanctions against corrupt officers who extort bribes from vulnerable groups on the grounds of lack of proper registration.”

While noting positive growth in the number of people granted citizenship and in the reduction of statelessness, the commission called on Russia to facilitate the acquisition of Russian passports by former Soviet citizens who have been living permanently in the country.

The publication coincides with the increase of anti-migrant sentiment in Moscow, and follows anti-migrant riots in the city’s south last weekend. The protests were triggered by the fatal stabbing of a 25-year-old there last week. Russia’s Investigative Committee identified the murder suspect as a migrant from the former Soviet republic of Azerbaijan.