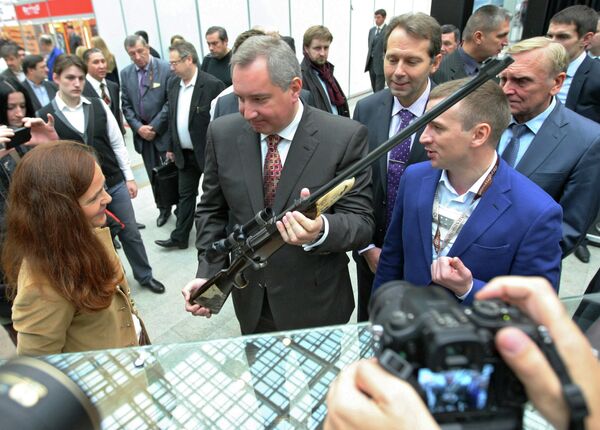 Russia’s nascent small-arms holding Kalashnikov Concern is in negotiations with Italy's Beretta on the establishment of joint ventures in Russia, a senior government official said Thursday.

Beretta, which also owns the Benelli and Tikka brands, is in talks with the Kalashikov Concern on setting up a joint venture to manufacture hunting and sporting weapons, said Deputy Prime Minister Dmitry Rogozin, who oversees the defense industry.

If that bears fruit, it could possibly lead to cooperation in military small arms at a later date, Rogozin said at the international Weapons and Hunting 2013 exhibition in Moscow.

“If all goes well … we should expect co-production of tactical, that is, combat weapons,” he said.

Russia is also “interested in optics, and possible localized manufacturer in Russia, including plain optics, night and TV systems, for civil uses and also for our state defense orders,” he said.

Russia welcomes foreign gun makers, particularly if it leads to cooperation with local manufacturers to expand the market, Rogozin said.

Several Russian firearms and weapons enterprises including the Izhmash, manufacturer of the legendary Kalashnikov assault rifle, and Izhmekh arms factories, were integrated into a new holding renamed Kalashnikov Corporation in mid-August.

The government said the aim of the merger was to set up a leading small-arms concern in the mold of the Russian military aerospace sector’s Tactical Missiles Corporation.

Both Izhmash and Izhmekh have been recently experiencing financial difficulties and a sharp drop in production, though Izhmash reported strong sales of its sporting guns in Europe and the United States last year.