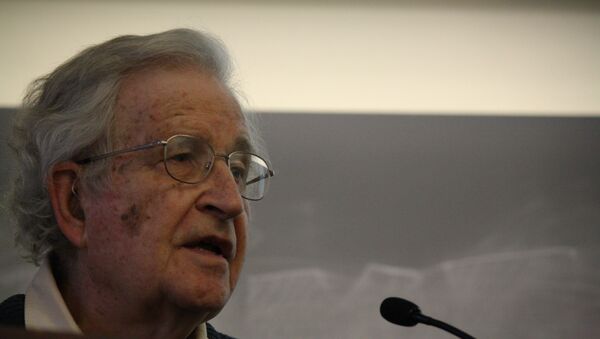 Noam Chomsky, an American philosopher, political commentator and professor of linguistics (emeritus) at the Massachusetts Institute of Technology, recently answered RIA Novosti’s questions about the idea of American exceptionalism.

Noam Chomsky, an American philosopher, political commentator and professor of linguistics (emeritus) at the Massachusetts Institute of Technology, recently answered RIA Novosti’s questions about the idea of American exceptionalism. Sometimes described as the "father of modern linguistics," Chomsky, 84, has authored dozens of books and has been an outspoken critic of US foreign policy.

Q: What are your thoughts on the ongoing discussion about American exceptionalism? Do you see most nations subscribing to some form of exceptionalism?

A: “American exceptionalism” is a quasi-religious doctrine holding that the US is uniquely good and therefore entitled, or even required, to intervene unilaterally for the benefit of all. The doctrine is not really American. Just about every powerful state in history has advanced similar claims, typically leaving a trail of blood and disaster.

Q: What is this “uniquely good” based upon? Is it institutions or values that determine uniqueness? Is it possible to project this uniqueness to other states or it is US-specific? Is the doctrine evolving under the pressure of the changing world?

A: Generally, powerful states (and even others) create mythologies about their “unique goodness.” Russia did too, right through its worst crimes. Hitler, Japanese fascists, and other monsters have done the same. So did Britain and France during their day in the sun. The most striking fact about claims to exceptionalism is that they are virtually exceptionless, and typically they have the features of deeply held secular religions.

Q: Is there a way to lead in the world without such a doctrine?

A: Sure. It would require raising the intellectual and moral level of those who promulgate cultural myths and values. And creating popular organizations with their own educational systems to combat official doctrines. It’s been done, can be done far more.