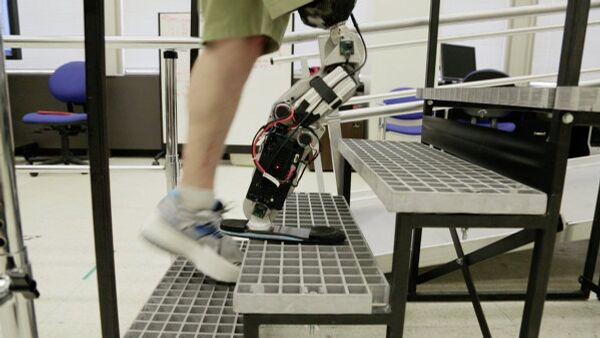 © The Rehabilitation Institute of Chicago
Subscribe
An American man has become the first person to walk using a bionic leg controlled by his own thoughts, researchers who helped develop the ground-breaking prosthesis told RIA Novosti.

WASHINGTON, October 1 (by Karin Zeitvogel for RIA Novosti) – An American man has become the first person to walk using a bionic leg controlled by his own thoughts, researchers who helped develop the ground-breaking prosthesis told RIA Novosti Tuesday.

The prosthesis allows 32-year-old Zac Vawter, who had his right lower leg amputated after a motorcycle accident in 2009, to do things like walk up and down stairs, sit down, stand up or reposition his leg with the same ease as a non-amputee, said Annie Simon, who works with Hargrove and was the second author on a report about the bionic leg that was published in the New England Journal of Medicine.

“With the bionic leg, we really worked to make it seamless and intuitive, so that Zac does what he wants to do and the leg will follow,” she said.

The prosthesis works with electrodes embedded into a socket that all amputees wear to attach a prosthetic limb. The electrodes sit on top of the skin and wait for a unique pattern of muscle activity that carries information from the prosthesis-wearer’s brain to the nerves to tell their leg what to do.

“So if Zac thinks he wants to lift his toes up, the sensors capture the pattern for ‘toes up,’ that information is sent to our computer algorithms and the computer tells the robotic leg, ‘OK, bring the toes up.’ And all this happens instantaneously,” Simon said.

Vawter had the nerves in his injured leg rewired after his accident, with a surgeon taking healthy nerves from the lower limb that was amputated and rewiring them to activate his hamstring. This helped to generate robust signals that the sensors are able to pick up, and that, in turn helped to make the prosthesis safer by dramatically reducing the error rate when Vawter used the leg.

In a statement, Vawter said the “bionic leg is a big improvement compared to my regular prosthetic leg. It responds quickly and more appropriately, allowing me to interact with my environment in a way that is similar to how I moved before my amputation.”

“For the first time since my injury, the bionic leg allows me to seamlessly walk up and down stairs and even reposition the prosthetic by thinking about the movement I want to perform. This is a huge milestone for me and for all leg amputees,” Vawter said.

RIC plans to conduct tests to see if the bionic leg works as well in amputees who haven’t had their nerves rewired, Simon said.

The researchers at RIC are working with commercial partners to develop a lighter-weight, smaller bionic leg than the 10-pound (4.5-kilogram) prototype that Vawter uses, which was developed in four years with an $8 million grant from the US Army’s Telemedicine and Advanced Technology Research Center (TATRC).

Those new bionic legs could be on the market in three to five years, Simon said.