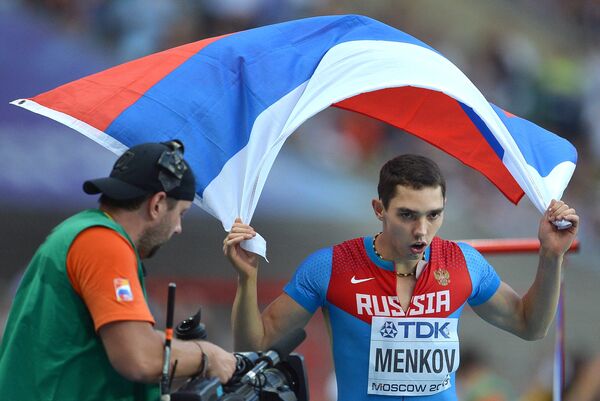 MOSCOW, October 1 (R-Sport) – Russian long jumper Alexander Menkov will battle fellow world champions Usain Bolt and Mo Farah for the athlete of the year award as the International Association of Athletics Federations announced the 10-man list of nominees on Tuesday.

Menkov, 22, won the European indoor championships in Gothenburg before claiming his first world title on home soil in Moscow in August. He dominated the field, setting a national record at 8.56 meters to beat second-placed Ignisious Gaisah by a whopping 27 centimeters.

But Menkov will face stiff competition from four-time winner Bolt, who took home three sprint golds in Moscow, and Farah who repeated his London Olympic triumph with victory in both the 5,000 and 10,000 meters.

Kipsang skipped the worlds but won both the New York and Berlin marathons this year.

The women’s list includes Svetlana Shkolina, a Russian high jumper who beat London Olympic champion Anna Chicherova and US rising star Brigetta Barrett in the Russian capital with a personal best of 2.03 meters.

But to win, Shkolina must beat the clear favorite, Shelly-Ann Fraser-Pryce of Jamaica, who matched Bolt's haul of three Moscow sprint golds.

The nominees will be cut to three of each sex on October 27 and then the council of the International Athletics Foundation will announce the winners on November 16.