A Middle East Free of WMDs Impossible Without Israel – Syria 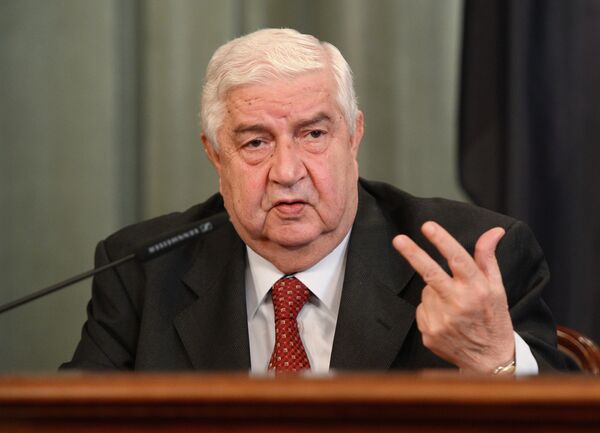 © RIA Novosti . Mikhail Voskresensky
/
Go to the mediabank
Subscribe
International
India
Africa
It is possible to create a Middle East without weapons of mass destruction only if Israel consents to the relevant international agreements, Syria’s foreign minister said Monday.

MOSCOW, September 30 (RIA Novosti) – It is possible to create a Middle East without weapons of mass destruction only if Israel consents to the relevant international agreements, Syria’s foreign minister said Monday.

“My country is once again calling on the international community to work on the establishment of an area free from weapons of mass destruction in the Middle East,” Walid Muallem said at the UN General Assembly.

But “the establishment of a WMD-free zone in the region is impossible without Israel, the only regional nuclear power, joining all treaties banning such weapons and placing its nuclear facilities under control of the International Atomic Energy Agency,” he said.

The issue of WMDs in the Middle East has become more relevant due to the Syrian civil war. Last week, the Organization for the Prohibition of Chemical Weapons approved a plan to eliminate chemical weapons in Syria, and the UN Security Council unanimously adopted a resolution supporting the plan.

Russian Foreign Minister Sergei Lavrov earlier said his country would press for an international conference on a WMD-free zone in the Middle East.

Russia remains one of the staunchest supporters of the ruling regime in Syria, where over two years of fighting between government and opposition forces have claimed the lives of more than 100,000 people, according to UN estimates.

The UN Security Council unanimously passed a draft resolution on Friday imposing binding obligations on the Syrian government to eliminate its chemical weapons program for the first time since unrest began there in March 2011.

The resolution rules out any use of force, Lavrov said Friday, adding that any possible use of force in the future under the UN Charter's Chapter VII would require a new resolution, if there is “conclusive and unequivocal proof” of noncompliance.

The administration of US President Barack Obama has accused Syrian President Bashar Assad’s government of being responsible for an August 21 chemical weapons attack outside Damascus that Washington claims left more than 1,400 dead.

Russian officials, including President Vladimir Putin, have repeatedly suggested in recent weeks that they have evidence showing that the attack was likely carried out by Syrian rebels seeking to frame Assad in order to secure outside military intervention against government forces.

After weeks of intense diplomacy and an almost three-day marathon of talks in Geneva between Lavrov and US Secretary of State John Kerry, Moscow and Washington reached a breakthrough agreement earlier in September to place Syria’s chemical weapons under international control for eventual destruction.