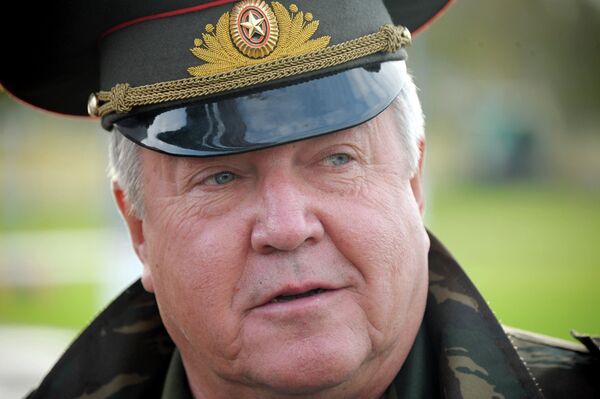 © RIA Novosti . Grigori Sysoev
/
Go to the photo bank
Subscribe
More than 20,000 of the Russian Interior Ministry’s internal troops have been put on alert in preparation for upcoming Russian-Belarusian drills, a senior ministry official said Tuesday.

The troops will conduct a series of territorial defense exercises in several Russian regions in preparation for the Zapad-2013 (West-2013) drills, said Deputy Interior Minister Nikolai Rogozhkin, who is also chief of the internal troops.

The missions will include counterterrorism and counterinsurgency operations as well as the reinforcement of sensitive installations in emergency situations, the official added.

On Monday, Russian President Vladimir Putin, supreme commander-in-chief of the nation’s armed forces, ordered a new series of snap checks of the military as well as civil services, to be conducted at the Interior Ministry’s internal troops, as well as in a number of civilian structures: the Transportation Ministry, the Energy Ministry and the Novgorod Region administration.

Vyacheslav Usik, a spokesman for the Russian General Staff, said earlier that Belarus would send 10,400 servicemen to the drills, which will also involve some 60 aircraft and helicopters and up to 250 combat vehicles. Moscow and Minsk held similar large-scale military exercises in September 2009.