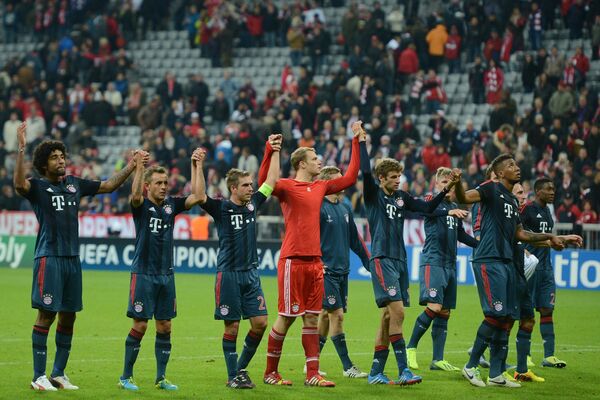 Bayern Munich began the defense of their Champions League title in style on Tuesday with a routine 3-0 defeat of CSKA Moscow.

MOSCOW, September 18 (R-Sport) — Bayern Munich began the defense of their Champions League title in style on Tuesday with a routine 3-0 defeat of CSKA Moscow.

Bayern was in front after just four minutes with a booming free kick from Austrian midfielder David Alaba, who struck the ball flat and hard over the wall into the corner of the goal from 20 yards out. CSKA goalkeeper Igor Akinfeev was uncharacteristically slow in getting down to the shot.

Robben himself claimed the third goal on 68 minutes, the Dutch star chesting down a pass over the top and smashing the ball past Akinfeev from 12 yards.

The result sees Bayern share an early lead of Group D with Manchester City, who also won 3-0 on Tuesday in their game at Viktoria Plzen.

Russia international stopper Akinfeev got over his early mistake to expertly deny Mandzukic with his feet when the Croatian broke the offside trap to go clean through on goal in the very next attack.

CSKA went on a sortie of its own moments later as top scorer Ahmed Musa steamed forward, but the Nigerian could only drag his final shot wide.

CSKA weathered more intense early pressure to produce another effort on goal through new signing Vitinho, who struck straight at Manuel Neuer in the Bayern goal.

Bad luck saw Bayern fail to go two up as Mandzukic stooped to head against the foot of the post; the deflection going straight into Akinfeev’s grateful arms.

The second goal seemed inevitable, and so it was as Mandzukic caught the CSKA defense napping to rise unmarked and score.

Robben had a volley at an open goal blocked in the second half as the Germans picked up where they left off.

Akinfeev reacted well on 56 minutes to catch a deflected strike from the Dutch winger, but the ex-Chelsea man did not have to wait much longer to find the net.

Robben’s strike goal meant both of the scorers in May’s 2-1 Champions League final win against Borussia Dortmund at Wembley Stadium registered on the night at the Allianz Arena.

Despite being passed off the park, CSKA persisted in trying to make a fight of it, but any time they seemed to advance their attacks were snuffed out all too easily.

Keisuke Honda found an inch of room in the Bayern box on 78 minutes but his slightly imperfect control saw the opportunity slip away, and CSKA substitute Georgi Milanov had an audacious volley dip just over the bar with eight minutes remaining.

Bayern substitute Xherdan Shaqiri should have made it four in the dying minutes but got too little on a cross from Thomas Muller.

CSKA next host Plzen on October 2, when Bayern travel to Manchester.