US Skepticism High on ‘Russia Plan’ for Syria 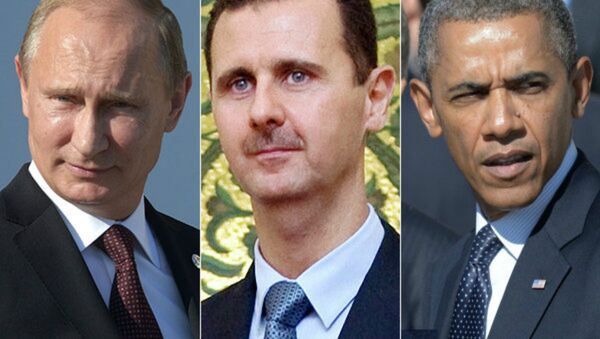 US politicians and media raced Tuesday to express skepticism of what they termed a Russian proposal for averting a US military strike on Syria, but grudgingly acknowledged that the initiative was, for now at least, moving forward.

WASHINGTON, September 10 (RIA Novosti) – US politicians and media raced Tuesday to express skepticism of what they termed a Russian proposal for averting a US military strike on Syria, but grudgingly acknowledged that the initiative was, for now at least, moving forward.

The tone was set by President Barack Obama who, in an interview with CBS news broadcast late Monday, hearkened back to the Cold War days of his predecessor, Ronald Reagan, saying “we don’t just trust but we also verify” when it comes to pursuing the latest proposal on Syria’s chemical weapons.

That proposal, which originated with an apparently off-the-cuff remark by US Secretary of State John Kerry that was quickly taken up by Russia – and which Obama said he discussed with Russian President Vladimir Putin last week – calls for Syria to put its chemical weapons under international control.

While many American politicians and media outlets acknowledged that the plan might indeed offer a way to avoid US military action against Syria and warranted consideration, some also voiced serious doubts about whether Moscow’s support of it was genuine and whether it was workable if so.

“The proposal for Assad to turn over his chemical weapons has an odor of snake oil about it,” the daily USA Today said in an editorial comment on its website, referring to Syrian President Bashar Assad. “As with any too-good-to-be-true offer, however, the question is: What's the catch?”

Other large US media outlets voiced similar wariness of the initiative, formally welcomed on Tuesday by Syria itself, with the Los Angeles Times calling the plan “essentially a ‘get out of jail free’ pass” for Assad and The Washington Post questioning whether Russia really wants Syria to relinquish its chemical arms.

“I can’t help but think that the Russians and Syrians have outmaneuvered Obama,” LA Times opinion columnist Jon Healey wrote.

“There are two ways to look at Russia’s proposal,” a Post blogger on foreign affairs wrote. “Either it’s an earnest proposal that has a good chance of actually happening or it’s a shrewd delaying tactic. … There’s also strong reason to suspect that Russia’s plan is a bluff, a clever chess move meant to delay.”

The influential, conservative news aggregator website Drudge Report, well known for its dim view of Russian President Vladimir Putin, summed up the mood among some in Washington in a single word, publishing the banner headline “Checkmate!” under a photo of Putin looking relaxed and Obama tense.

Sen. John McCain, a forceful advocate of US military intervention in Syria, said in one television appearance Tuesday that “I’m very skeptical” and added in another that “when you see the plane-loads of Russian arms flying into Damascus on a daily basis” there were “ample” grounds for skepticism.

Washington website Politico said the attitude of most members of the US Congress to the Syrian arms initiative was one of “healthy skepticism” and stated that members of the powerful Senate Foreign Relations Committee did not believe Moscow’s avowal to work with Damascus to implement the plan.

“Leaders of that committee were unconvinced of the veracity of Russia’s offer,” Politico said.

US House Speaker John Boehner also expressed skepticism of the proposal. Asked why he doubted it, Boehner told the Huffington Post website: “Because of the actors involved. Simple as that.”

Despite voicing his doubt about the initiative, McCain and others acknowledged that it should be explored and The Associated Press quoted an unidentified White House official as saying that Obama had agreed to US participation in a debate at the United Nations on the Syrian chemical weapons proposal.

“Not to pursue this option would be a mistake,” McCain said.