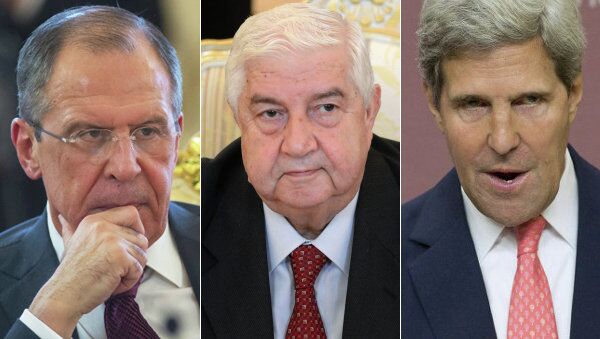 © Sputnik
Subscribe
International
India
Africa
The top diplomats from the United States, Russia and Syria will meet this week to discuss Syria’s chemical weapons, media reports cited unnamed US officials as saying Tuesday. The meeting between US Secretary of State John Kerry, Russian Foreign Minister Sergei Lavrov and Syrian Foreign Minister Walid Muallem is slated to be held in Geneva on Thursday.

Reports of the planned meeting come as Washington awaits proposals from Russia on how Syria’s chemical weapons arsenal could be placed under international control and as US President Barack Obama’s administration pushes for domestic and international support for American military action against Syria.

Washington accuses Syrian President Bashar Assad’s government of carrying out a deadly Aug. 21 chemical weapons attack outside Damascus but has said it will examine Russian proposals aimed at preventing a US strike by ridding Syria of its chemical stockpiles.

Kerry said Tuesday that he expects proposals later in the day from Lavrov on how to secure Syria’s arsenal, adding that any deal must be backed by a binding UN Security Council resolution.

“He is sending those to us. They’ll be coming informally in the course of the day. We’ll have an opportunity to review them,” Kerry said during a Google+ hangout interview.

Kerry said any such plan would require a “full resolution from the Security Council in order to have confidence that this has the force that it has to have” and that it must include “consequences if games are played and somebody tries to undermine this.”

The Security Council had been set to hold closed consultations late Tuesday afternoon, The Associated Press cited a UN spokesman’s office as saying. But Australia’s ambassador to the UN, Gary Quinlan, said on his Twitter feed that the meeting had been canceled.

It was not immediately clear why the meeting was canceled, but CNN reported Tuesday that Russia had called it off.

In a Tuesday telephone call with French Foreign Minister Laurent Fabius, Lavrov called “unacceptable” a Security Council resolution proposed by France that would declare the Syrian government responsible for “the possible use of chemical weapons,” the Russian Foreign Ministry said in a statement.

Almost simultaneously with Kerry’s Google+ hangout interview, news emerged that Muallem had said Syria is ready to sign the Chemical Weapons Convention – an international ban on chemical weapons – and open its storage facilities to foreign governments.

“We intend to give up chemical weapons altogether,” Muallem said in an interview on Lebanon’s Al-Maydeen television network.

Asked about Muallem’s comments, Kerry welcomed them cautiously, saying he hopes the Assad government “would take advantage of this opportunity as a moment to try to make peace in Syria, genuinely reach out [and] live up to what they just said they would do with respect to the Chemical [Weapons] Convention.”

“I hope that perhaps in the next days they’d be willing to try to make that concrete,” Kerry said.

Earlier on Tuesday, Kerry appeared before the US House of Representatives’ Armed Services Committee where he cautioned that the Security Council should not be used as a stalling tactic to delay a possible US military strike.

“If the United Nations Security Council seeks to be the vehicle to make it happen, that cannot be allowed to simply become a debating society,” Kerry said. “We have to continue to show Syria, Russia and the world that we are not going to fall for stalling tactics.”

The international debate over the Syria standoff has shifted rapidly over the past 24 hours after Kerry proposed in an apparent offhand comment Monday that a US strike against Syrian targets could be averted if Damascus put “every single bit” of its chemical weapons under international control by week’s end.

Russian President Vladimir Putin said Tuesday that the plan would only be feasible if the United States and its allies pledge not to use force in Syria but expressed hope that it would “be a good step toward a peaceful resolution of the crisis.