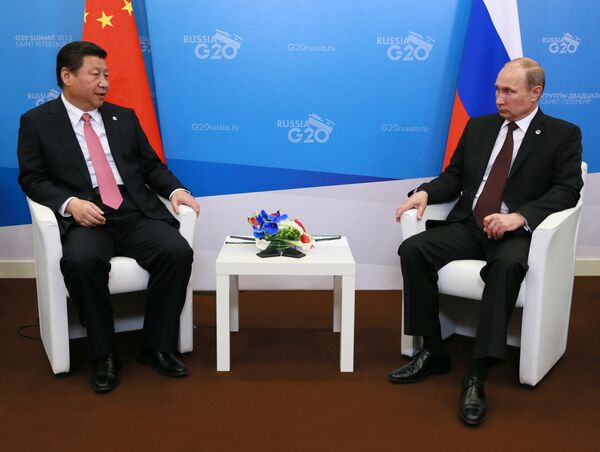 Russian and Chinese state corporations signed a string of economic agreements including another document paving the way for the long-awaited multi-billion dollar gas deal, after President Vladimir Putin and his Chinese counterpart Xi Jinping met Thursday at the G20 summit in the city of St. Petersburg.

ST. PETERSBURG, September 5 (RIA Novosti) – Russian and Chinese state corporations signed a string of economic agreements including another document paving the way for the long-awaited multi-billion dollar gas deal, after President Vladimir Putin and his Chinese counterpart Xi Jinping met Thursday at the G20 summit in the city of St. Petersburg.

Russian gas giant Gazprom and the China National Petroleum Corporation (CNPC) signed the basic conditions for the long-term deal to supply at least 38 billion cubic meters of Russian gas a year to China.

The conditions, which are legally binding, cover items including the start date and volume of gas deliveries; the take-or-pay level; the amount of guaranteed payments; and gas transfer point, Gazprom said in a press release.

Neither company specified what the conditions are, including the all-important issue of price.

Gazprom said the deal is expected to be finalized by the start of 2014. The project envisages the construction of a new Russian pipeline to China by 2018.

The two sides have been negotiating the issue for years, and consistently failing to agree the price issue, while China has gone ahead with signing massive gas supply deals with other supplier nations including Australia, Qatar and Turkmenistan.

The final achievement of an agreement on the specifics of the Gazprom deal comes just a day after China's President Xi opened the world's second-largest gas plant in neighboring Turkmenistan that will send at least 25 billion cubic meters a year of the fuel to Beijing, according to its operator Turkmengaz.

The deal, first announced in June, also saw Novatek agree to deliver at least 3 million tons of natural gas a year to China. The Russian company said in a statement it expects that deal to be finalized by December, providing it is approved by Russian state regulators.

Novatek remains the main shareholder in the Yamal liquefied natural gas plant, due to open by 2016, though the company plans to sell another 9-percent stake in the project, bringing its own share to 51 percent. France’s Total also owns 20 percent.

Russia’s state-run oil company Rosneft was also expected to sign a deal with CNPC at the G20 forum on construction of an oil refinery in the Chinese city of Tianjin, but failed to do so.

“We’re working, trying to improve the conditions,” Rosneft head Igor Sechin told journalists. He declined to say whether the deal could be clutched by year’s end.

Putin and Xi did not discuss the ongoing Syrian crisis because they did not have enough time, a spokesman for the Chinese Foreign Ministry said later Thursday.

(This article has been updated to include the comment on Syria in the last graf.)