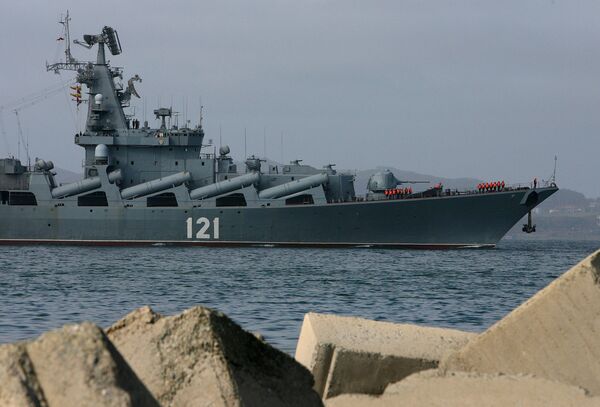 The task force currently includes vessels from the Pacific, Northern, Baltic and Black Sea fleets: the destroyer Admiral Panteleyev, the large amphibious landing ships Admiral Nevelsky and Alexander Shabalin, the frigate Neustrashimy, and a number of support and auxiliary vessels.

The new group includes the large amphibious landing ships Novocherkassk and Minsk and the electronic intelligence ship Priazovye. It will relieve the current task force as soon as it passes through the Bosporus and Dardanelles Straits, which is expected Thursday or Friday, the source said.

A high-ranking representative of the General Staff told RIA Novosti the Slava class guided missile cruiser Moskva, which is currently in the Atlantic, will arrive in the Mediterranean on September 17, adding that operational command will then be transferred from the Admiral Panteleyev to the Moskva.

Two guided missile corvettes, Shtil and Ivanovets (Nanuchka 3 and Tarantul class respectively) will arrive in the area on September 29, the General Staff said.

A military-diplomatic source in Moscow told RIA Novosti on Tuesday Russia’s naval force in the Mediterranean Sea will not be expanded despite the worsening situation in the region. He also said Russia’s existing flotillas in the Mediterranean are undergoing routine rotations, and stressed “this is a regular rotation process, planned at the start of the year.”