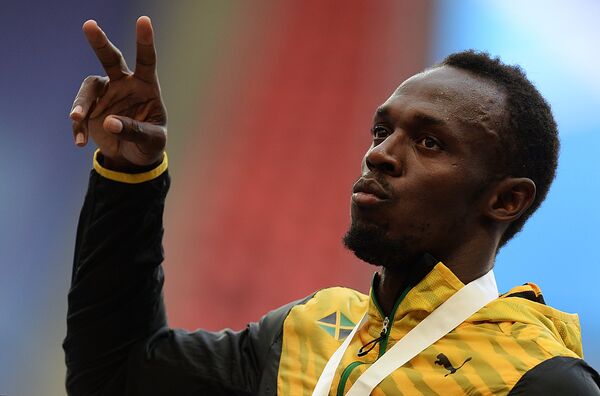 The final day of the world athletics championships concluded as the first Sunday did seven days ago – with Usain Bolt swaggering around the track at Luzhniki Stadium adorned with the Jamaican flag.

MOSCOW, August 18 (R-Sport) – The final day of the world athletics championships concluded as the first Sunday did seven days ago – with Usain Bolt swaggering around the track at Luzhniki Stadium adorned with the Jamaican flag.

Then it was after reclaiming his 100m title. Today it was after anchoring the Jamaican 4x100 relay team to its third-straight gold medal at the world championships, defeating a Justin Gatlin-led U.S. squad by 0.30 seconds. Canada was promoted to bronze after Britain was disqualified for making a baton pass outside the second exchange zone.

Bolt, meanwhile, became the most successful athlete of all-time at the worlds, growing his medals collection to eight gold and two silver, a showcase that surpasses Carl Lewis's eight gold, one silver and one bronze.

“It feels good to win; it is what I train for," said Bolt, who also won the 200m gold in Moscow. "For me everything's great, I continue dominating, I continue working hard.”

While Bolt was the most recognizable Jamaican face over the nine-day world championships, which wrapped Sunday night, he shared the spotlight over and over with teammate Shelly-Ann Fraser-Pryce, who dominated the women's sprints just as convincingly, winning her own 100m and 200m too.

She helped Jamaica achieve the first-ever championships sprint sweep when she anchored a rout in the 4x100 relay earlier Sunday in front of one of the competition's most impressive turnouts at Luzhniki Stadium. Jamaica won by 20 meters and set a new national and championship record of 41.29, leaving France, the U.S. and Britain for dead.

“I'm just so happy that we have a young team that set championships record and the national record of course,” Fraser-Pryce said. “I'm so excited for what so far has happened to the team.”

France crossed the line second in 42.73 but was later disqualified for an illegal baton change, handing the silver to the reigning Olympic champion Americans, which registered a 42.75. Britain was promoted to bronze, clocking a 42.87.

The victory ended years of coming close for Obergfoll, when she often lost to 2011 world champion Maria Abakumova of Russia, who was the favorite for gold in Moscow but had to settle for bronze.

"Finally, it’s there, the gold, just such a beautiful thing," Obergfoll said. "All those years, I always had good results, yeah, ok, but never such a throw ... In the year when I didn’t expect it, it finally happened."

Kiprop was protected by his teammate Nixon Chipsera all the way until the final 100m, when he kicked free of the chasing pack and sprinted for the line to win in 3:36.28.

The win is a third major title for the 24-year-old following his 2011 world championship and 2008 Olympic triumphs.

The silver medal went to Matthew Centrowitz of the United States, who was half a second behind Kiprop, with bronze for South Africa’s Johan Cronje, who edged out Chepsema on the line.

The following final, the women's 800m, saw Kenya's Eunice Sum burst through a crowd in the final 50m to come out the surprise winner ahead of reigning Olympic champion and 2011 gold medalist Mariya Savinova of Russia.

“When I took the start, I didn't know I could be a winner,” Sum said. “I was just hoping for top five or maybe bronze. In the last 100 meters I saw I was really moving, while the others seemed to be stuck. I am very happy with my first win.”

She hadn't broken the two-minute mark at these championships, had the seventh-best semifinal time on Friday and the 14th-best qualifying time a day earlier.

Savinova ran a season's best 1:57.80 for the silver medal but was deeply disappointed with what she called a "tactical error" in underestimating Sum.

“Everything was not according to plan today," Savinova said. "I didn't believe that the Kenyan would improve her best result by two seconds. I should have just run away with that 150 meters to the finish, but I didn't do it. That's my mistake."

Alysia Montano of the United States controlled the race over the first 400m, setting a 56.06 split, but dropped back in startling fashion as the race neared its end, giving way to Savinova and her American teammate Brenda Martinez, who won bronze.

"I don't know what to say, I have managed to win," Tamgho said of the jump, a new personal best. "I had to go 100 percent to win. It was difficult for the last attempt; I had to think about being very fast on my run-up.”

Cuban Pedro Pablo Pichardo, 20, jumped last, after Tamgho, and the Frenchman's leap seemed to unsettle him as he meekly hopped into the pit to settle for silver with second-attempt effort of 17.68. The bronze went to Will Claye of the United States with 17.52m, his best result this season.

At the end of day nine, Russia topped the medal table with seven gold and 17 in total, while the U.S., which ended in second place with six golds, won the most medals of any color with 25.