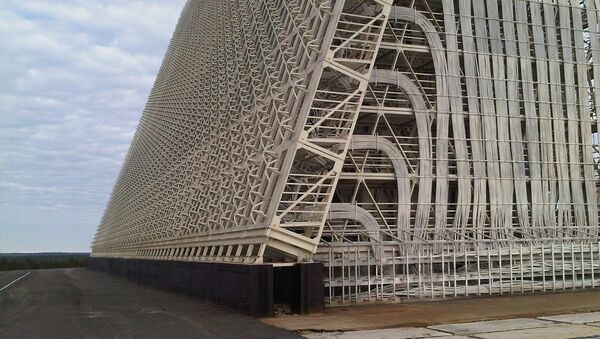 © RIA Novosti . Ruslan Girfanov
Subscribe
The construction of an advanced early missile warning radar will begin on Tuesday in central Russia to enhance the capabilities of the country’s missile defenses, a Defense Ministry spokesman said.

MOSCOW, August 13 (RIA Novosti) – The construction of an advanced early missile warning radar will begin on Tuesday in central Russia to enhance the capabilities of the country’s missile defenses, a Defense Ministry spokesman said.

The new Voronezh-class radar will be built near the town of Orsk in the Orenburg region as part of the comprehensive missile early warning network to be completed in Russia by 2020, Col. Alexey Zolotukhin told reporters on Monday.

“In addition to the Orenburg radar, the preparations for construction of new-generation radars are underway in the Krasnoyarsk and the Altai territories,” Zolotukhin said.

The new assembly technology allows the construction of radars from standard container-type macro-modules at the place of deployment, while the infrastructure required for this purpose is minimal. As a result, the radar deployment period has been reduced to 12-18 months, compared to 5-9 years previously, the spokesman said.

Four Voronezh-class radar stations built with the use of high factory-readiness technology are already part of the Russian missile early warning network.

A Voronezh-DM radar is on combat duty in the Krasnodar territory and a Voronezh-M radar - in the Leningrad region. The Voronezh-DM radars in the Kaliningrad and Irkutsk regions are in the testing stage of operation.

Voronezh-class radars have an operational range of 6,000 kilometers (3,728 miles). They can be quickly redeployed to a new site and require a smaller crew to operate, compared to previous generation stations.