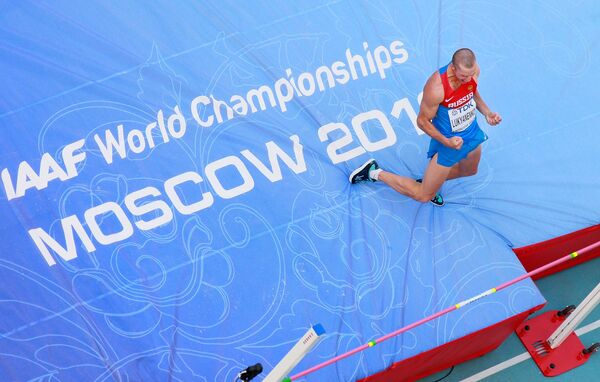 © RIA Novosti . Anton Denisov
/
Go to the photo bank
Subscribe
Mo Farah extended his dominance over distance running with 10,000m gold and Edna Kiplagat of Kenya became the first woman to defend the marathon title in an enthralling first day of competition at the world athletics championships in Moscow on Saturday.

MOSCOW, August 10 (R-Sport) - Mo Farah extended his dominance over distance running with 10,000m gold and Edna Kiplagat of Kenya became the first woman to defend the marathon title in an enthralling first day of competition at the world athletics championships in Moscow on Saturday.

A year after clinching the 5,000m and 10,000m Olympic gold on home soil, Farah ran a textbook tactical race to tighten his grip over his event and go one better than 2011, when he was overtaken by Ethiopia's Ibrahim Jeilan and had to settle for silver.

On a muggy and oppressive Moscow evening, Farah came around the final bend with Jeilan closing the gap in what looked to be a case of deja vu, but this time the Brit found "another gear" to well and truly vanquish his Daegu defeat.

"I remember two years ago the exact same thing happened but I knew Jeilan was capable so it was important that I had something left," Farah said.

Farah's triumph came on the heels of Kiplagat's historic win in the marathon.

Battling hot and humid temperatures that soared close to 30 degrees Celsius, Kiplagat overcame a neck-and-neck battle with unheralded Italian Valeria Straneo at the 40km mark, bursting ahead to finish with a time of 2:25:44 hours.

Straneo, the Italian national record holder, ended up 14 seconds back at 2:25:58 hours, setting a season-best mark.

"I am delighted I was able to defend my title successfully," she said. "I dedicate my victory to my husband for letting me have enough time to train."

Elsewhere, day one of the decathlon didn't go according to plan for Olympic champion Ashton Eaton, who had to rely on the fastest 400m ever run at a world championships - 46.03 seconds - to take a razor-thin nine-point lead into Sunday.

Eaton's fellow American Gunnar Nixon is second after he managed a whopping 2.14m to win the high jump, with Michael Schrader of Germany in third a further 66 points back.

The day's other events were restricted to prelims.

Jamaican superstar Usain Bolt barely broke a sweat to qualify for the 100m semifinals in a snail's-pace time of 10.07 seconds, with his main challengers Justin Gatlin and Nesta Carter safely through, too.

Only 2005 world champion Gatlin and another American, the 2010 world indoor silver medalist Mike Rodgers, ran under 10 seconds in the prelims.

The semifinals and final are Sunday, when Bolt will hope to avoid the humiliation of a second false-start disqualification and beat a second-rate field deprived of injury withdrawal Yohan Blake and the suspended Tyson Gay and Asafa Powell.

There was more joy for Britain in the women's 400m, where team captain Christine Ohuruogu clocked the fastest qualifying of 50.20.

The next fastest time belonged to American Francena McCorory, who is looking to improve on her fourth-place finish at the 2011 world championships in Daegu, South Korea. She led heat three Saturday at 50.56 seconds. Amantle Montsho, the reigning world champion, took the fifth and final heat of the day, clocking 50.75.

The other medals up for grabs on Sunday are in the women's long jump, where Britain's Shara Proctor registered the longest jump in qualifying of 6.85m; the women's discus - led in qualifying by German Olympic champion Sandra Perkovic with 63.62m; and the women's 10,000m, a straight final.

The championships at Moscow's vast Luzhniki Stadium run through August 18.