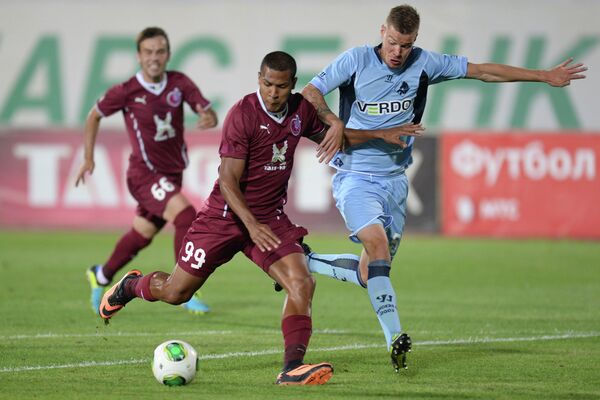 Defender Cesar Navas put Rubin ahead, nodding home on 18 minutes when Ivan Marcano's header crashed back off the crossbar. Roman Eremenko gave the hosts a 2-0 win on a comfortable night by slotting into the corner four minutes from time.

Goals from Dmitry Torbinsky and Jose Salomon Rondon gave the Russians a 2-1 lead in the first leg in Denmark last week.

The draw for the playoff stage is Friday. Teams from the same country cannot be drawn against each other, giving Russia the chance to have group stage representation from four teams. Anzhi Makhachkala is already there after finishing third in the Russian Premier League last season.

Football team Kuban is attempting to join Rubin and Spartak in the playoff round, leading Scotland’s Motherwell 2-0 going into Thursday's second leg in southern Russia.

The hosts dominated proceedings from the start, with new signee Dmitry Torbinsky and Bibras Natkho going close from range early on.

Waves of unanswered attacks made a goal inevitable and Spanish center-back Navas obliged, quickest to react when his countryman Marcano hit the woodwork.

Alexander Ryazantsev nearly put Rubin two up just before half time, steering narrowly over from 18 yards.

Rubin missed a double chance at the start of the second half as Rondon smashed the ball into the chest of Randers goalkeeper Mikkel Andersen and Eremenko volleyed the rebound wide.

An amusingly similar episode followed as Finland international Eremenko had his shot saved after Rondon could only hit straight at Andersen's legs.

The Danish goalkeeper then saved point-blank from Ryazantsev as the chances showed no sign of abating.

A rare effort at the other end saw Viktor Lundberg volley over, with an underworked Ryzhikov left to retrieve the ball from a ballboy.

But with Kurban Berdyev's men slicing their opponents open at will, a second was sure to follow. A neat counterattack ended with Eremenko slotting into the corner and the result was set in stone.