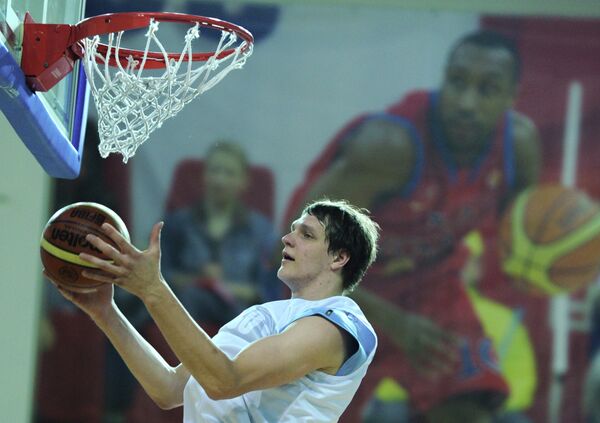 MOSCOW, July 28 (R-Sport) – Concerns over whether the Russian Basketball Federation would be able to cover insurance costs for three NBA players headed to the European championship in September have been resolved, national team general manager Fyodor Voropaev told R-Sport Sunday.

The participation of Alexey Shved, Timofey Mozgov and Sergey Karasev had been in jeopardy after their NBA clubs requested the federation pay extra insurance on top of FIBA’s mandatory coverage, Voropaev said.

“At the request of some of the players’ clubs and agents we’ve drawn up and will pay extra insurance,” he said.

He said he lobbied the federation for a minimum 20,000 euros ($26,500) for each player. Brooklyn Nets forward Andrei Kirilenko, the national team’s only other NBA player, will not suit up.

Shved, a 6-foot-6 guard, played 77 games with the Minnesota Timberwolves last season. Karasev, 19, was the 19th overall pick by the Cleveland Cavaliers at the NBA Draft in June.

Mozgov, a back-up center with the Denver Nuggets, has a history of ankle injuries, including one suffered in a 2012 Olympic qualifying tournament that sidelined him from training before the London 2012 Games. He re-signed with the Nuggets on Saturday for a reported three years.

NBA clubs often encourage their players – or outright bar them – from playing in international competition over fear of injury. The European championship, also known as EuroBasket, is particularly distressing as it occurs about a month before the NBA preseason opens.

EuroBasket, the qualifier for the 2014 FIBA World Championship, runs Sept. 4-22 in Slovenia.