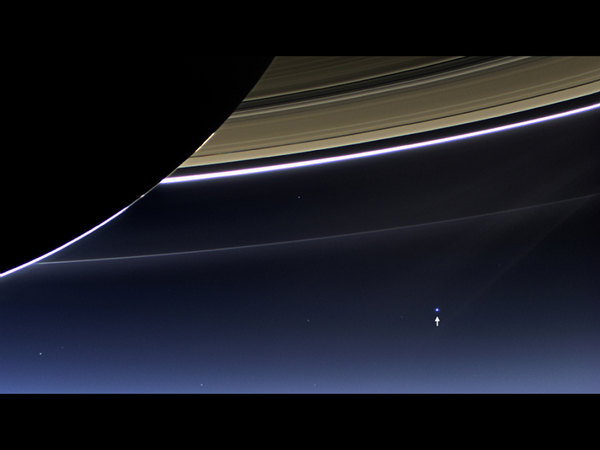 © NASA/JPL-Caltech/Space Science Institute
Subscribe
NASA’s Cassini spacecraft has captured a rare image showing Saturn and its rings, the Earth and its moon in the same frame, the US space agency said.

WASHINGTON, July 23 (RIA Novosti) - NASA’s Cassini spacecraft has captured a rare image showing Saturn and its rings, the Earth and its moon in the same frame, the US space agency said.

Cassini’s wide-angle camera captured the color image, which show the Earth as a pale blue dot and the moon as a bright white dot in the distance, with Saturn’s dark side and several of its rings in the foreground, on Friday from its position 753,000 miles (1.212 million kilometers) from Saturn and nearly 900 million miles (1.5 billion kilometers) from Earth.

It was the first time Cassini's highest-resolution camera captured Earth and its moon as two distinct objects, and only the third time that an image of Earth has been taken from the outer solar system, NASA said Monday, when it released the images.

“Pictures of Earth from the outer solar system are rare because from that distance, Earth appears very close to our sun. A camera's sensitive detectors can be damaged by looking directly at the sun… Cassini was able to take this image because the sun had temporarily moved behind Saturn from the spacecraft's point of view and most of the light was blocked,” NASA said.

On the same day as Cassini snapped its images, NASA’s MESSENGER spacecraft, the first probe to orbit Mercury, took a black-and-white image of Earth and the moon from 61 million miles (98 million kilometers) away.

Earth and the moon are less than a pixel in size in the MESSENGER image but appear very large because they were overexposed to capture as much light as possible. Overexposure causes objects to be saturated with light and appear artificially large.

In another first, NASA gave people on Earth advance notice of the double interplanetary photo session, and invited the public to locate and wave at Saturn and post pictures of themselves doing so on the Internet. More than 20,000 people around the world did so, NASA said.

"We can't see individual continents or people in this portrait of Earth, but this pale blue dot is a succinct summary of who we were on July 19," said Linda Spilker, Cassini project scientist at NASA's Jet Propulsion Laboratory (JPL) in Pasadena, California.

"Cassini's picture reminds us how tiny our home planet is in the vastness of space, and also testifies to the ingenuity of the citizens of this tiny planet to send a robotic spacecraft so far away from home to study Saturn and take a look-back photo of Earth," she said.

Cassini took a total of 323 images of Saturn and its ring system, using both wide-angle and narrow-angle lenses and different spectral filters. Scientists are using multiple images to put together a mosaic of Saturn’s rings, which NASA expects to release in the next several weeks.