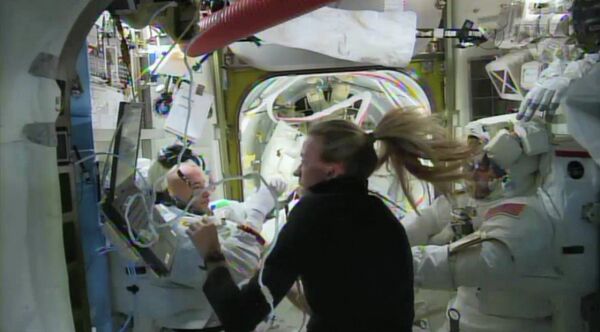 © ESA
Subscribe
NASA is hurrying to get spare spacesuit parts aboard a Russian supply ship bound for the International Space Station (ISS) after about a quart (1 liter) of water poured into the helmet and suit of an Italian astronaut during a spacewalk last week.

WASHINGTON, July 22 (RIA Novosti) – NASA is hurrying to get spare spacesuit parts aboard a Russian supply ship bound for the International Space Station (ISS) after about a quart (1 liter) of water poured into the helmet and suit of an Italian astronaut during a spacewalk last week, The Associated Press (AP) reported Monday.

The cargo ship is set to launch from Kazakhstan on Saturday, and NASA is trying to get the spare parts aboard the spacecraft to help the ISS crew fix whatever led to the malfunction that could have drowned Italian astronaut Luca Parmitano during the July 16 spacewalk.

NASA has said it remains unsure exactly what led to the to the water pouring into Parmitano’s helmet, drenching his nose and mouth and prompting Mission Control at the Johnson Space Center in Houston to decide to abruptly end the planned six-hour spacewalk, even though “the water was not an immediate health hazard” for the astronaut.

The aborted spacewalk was the second shortest in ISS history. The record for the shortest ISS spacewalk belongs to US astronaut Mike Fincke, who in 2004 was outside the space station for just 14 minutes when a pressure sensor problem was detected in his Russian spacesuit.

Parmitano, a European Space Agency (ESA) astronaut, and US flight engineer Chris Cassidy were supposed to prepare for the arrival of the new Russian lab by replacing, relocating and reconfiguring video and electronic equipment aboard the ISS.

None of the tasks that Cassidy and Parmitano were scheduled to do during the spacewalk were urgent or vital to the safety of the crew on board the ISS, NASA said last week.