Sailing Around the World With Three Cats on the Boat 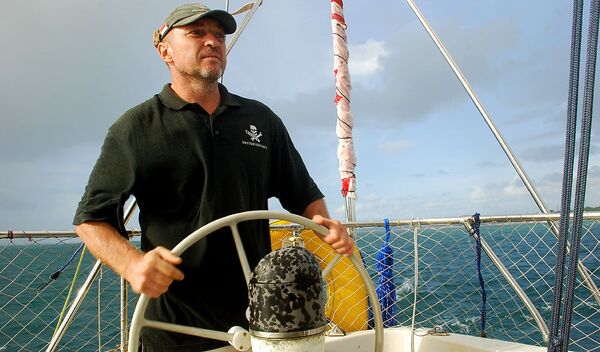 For a year and a half now, Sergei Morozov has been sailing around the world on his 10-meter yacht, with no company except for three cats. He regularly records his travel experiences in a blog, sharing with readers what he sees, what he feels and what he dreams of.

BALI (Indonesia), June 25 (Mikhail Tsyganov, RIA Novosti) – For a year and a half now, Sergei Morozov has been sailing around the world on his 10-meter yacht, with no company except for three cats.

He regularly records his travel experiences in a blog, sharing with readers what he sees, what he feels and what he dreams of. It’s thanks to them he has been able to embark on this trip. His dream right now is to complete his round-the-world voyage by sailboat, and then try to become the first person ever to go around the world in a rowing boat.

The Roads We Choose

"I set sail from Halifax, Canada on Dec. 5, 2011, to head for Bermuda in the North Atlantic," Morozov said. "Those who go out to sea, even occasionally, know how dangerous the North Atlantic can be, especially in winter – big vessels are often lost out there, let alone small yachts... Twice during that crossing, I thought the end was near. I never sent an SOS signal, but at one point, when I felt as though I were on the verge of a heart attack during a storm with winds of 60-70 knots, I contacted the crew of a passing ship and asked them to phone my daughter to tell her that I had done everything that I could, and had no regrets whatsoever about having set out on this voyage in the first place. I was really happy that I'd set sail and gotten so close to realizing my childhood dream - to sail around the world. And when I opened my eyes the next morning, I was genuinely surprised to be conscious again. Later on, it turned out that I had suffered an attack of intercostal neuralgia,” he said. 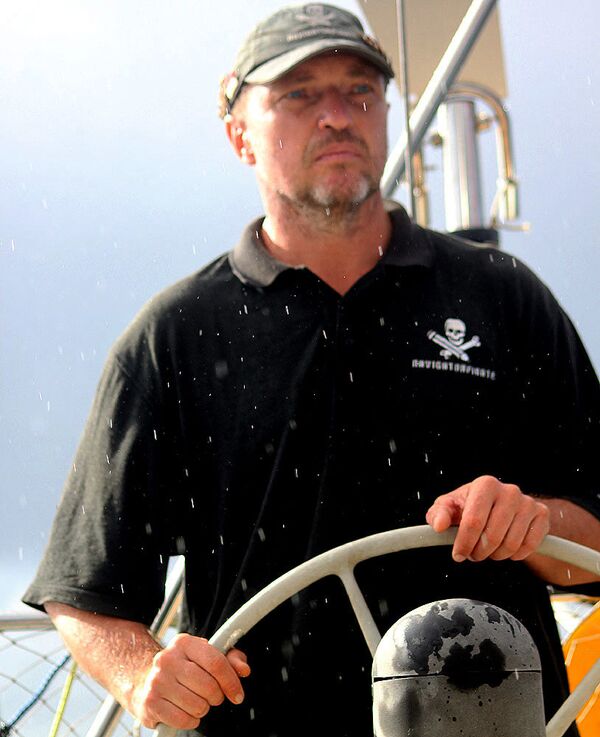 "The most important thing is getting started," Morozov said. "My first crossing - from Halifax to Bermuda - lasted three weeks. The next three legs - from Bermuda to Grand Bahama, then to Panama, and then on to the Galapagos Islands - took about the same time."

The journey from the Galapagos Islands to the Marquesas (Nuku Hiva) lasted a month.

"The Galapagos-Nuku Hiva passage resulted in damage to my yacht, and many thought that I wouldn't be able to continue my trip and suggested I put an end to my voyage," Morozov said.

"But I went on to Honolulu and got my vessel repaired. It took me as long as five weeks to cover the 3,000-mile distance because my vessel was not fully operational. And then
I stayed there for two months."

The trip from Honolulu to Samoa via Kiribati took another five weeks.

And the longest crossing, from Apia (Samoa) to Bali, took two months.

Morozov, 49, was born in Rostov-on-Don and got the sailing bug at the age of 10.

"I have no idea where it came from," he said. "Sailing just became an obsession with me and by the time I graduated from school, I firmly believed that I was destined to become a sailor and to navigate a sailboat."

He went on to study sea navigation at the Rostov Fishing Industry School and, through the Fisheries Ministry, subsequently found a job on board the Kruzenstern training sailboat.

However, then came the collapse of the Soviet Union and a painful separation from his wife, who left her husband and daughter. 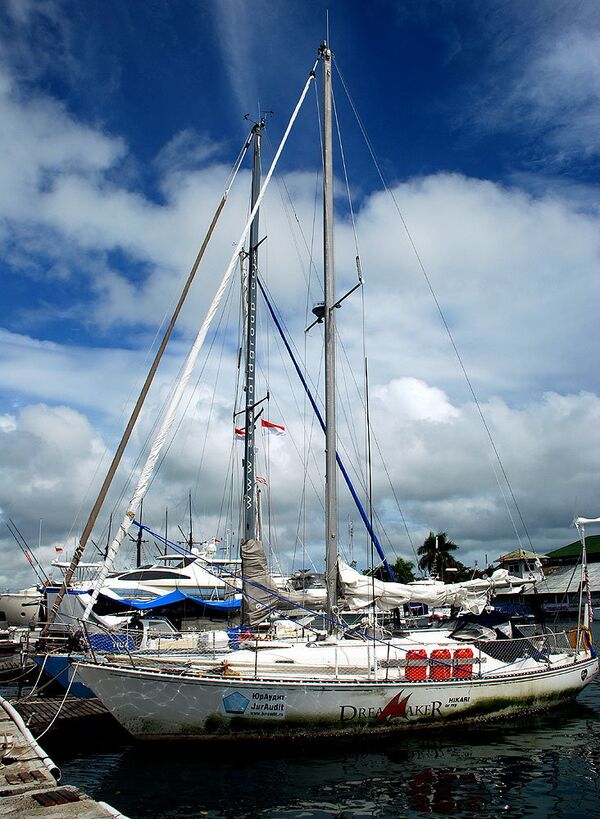 In 2003, Morozov and his daughter ended up in Canada, where he spent the next 10 years doing odd jobs to provide for his child and himself.

But when his daughter grew up and began living her own life, Morozov decided the time had come to realize his childhood dream of making a one-man voyage around the world.

"I didn’t have the money to berth it in a marina, so I wrote an appeal on my blog: 'Guys, please give me a $3,000-$4,000 loan, so that I can get this boat back on track. I'll have it seaworthy within a year.' And my readers just started sending me money. In just a couple of months, I had enough to get my boat ready for the journey. And everyone who contributed wanted me to set off as soon as possible, preferably that same year (2011), and to show them what I saw along the way, so that they could see the big wide world through my eyes. And that’s basically what I'm trying to do now, as best as I can." 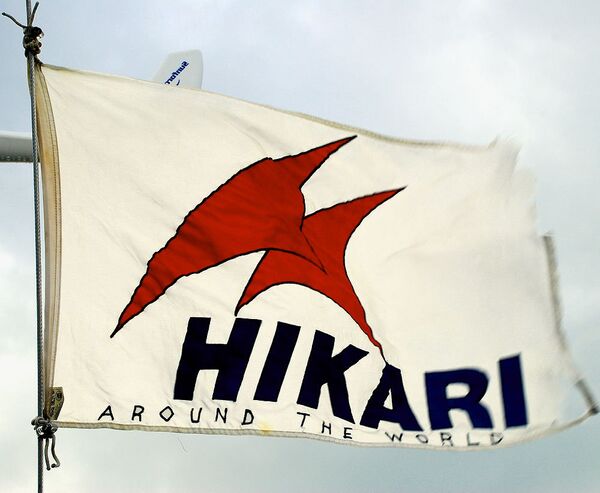 On May 29, 2013, Morozov arrived in Bali, having completed a 5,000-mile crossing from West Samoa. While on the island, he carried out the necessary repairs to his boat and
stocked up on food supplies. He also got some rest before setting sail again on Saturday toward Mauritius.

By the time he arrived in Bali, he had seven cats on board.

"I had my 'children' sailing with me," Morozov said. "I have had my cat Tsilya for seven years now. She gave birth to a daughter some 15 miles from Miami, and so I named the kitten Miami. And I adopted a tomcat, Ali, in Grand Bahama. It happened like this: Something bit Tsilya quite badly on a marina berth where we were staying, and I took her to a local shelter for an examination because she was already pregnant and I was worried about possible complications. At the shelter, I saw Ali. He only had three legs, having lost his left hind leg in a road accident. Ali sat on top of my bag and looked at me as if to say, 'You just can't leave me behind, buddy. I really want to go with you.’"

So Morozov took the disabled cat along with him, introduced him to Tsilya and showed him around their yacht.

Morozov made things clear right from the start, telling the tomcat: "If I take you on board, bear in mind we may never come back, because we have a round-the-world trip ahead of us. But if you want to join us, just show us that you're ready for everything that Tsilya and I are."

"And Ali showed that he was determined to come with us," Morozov said. "In every port of call, my cats are free to go on shore and leave. But they are still with me, and this makes me proud because it’s a sign. By staying with me, they make me sure that we'll make it."

The four kittens that were born at sea six weeks before his arrival in Bali had to be left on the island, though. Morozov left them in good hands.
Continuing the voyage with seven cats on board would not have been easy... 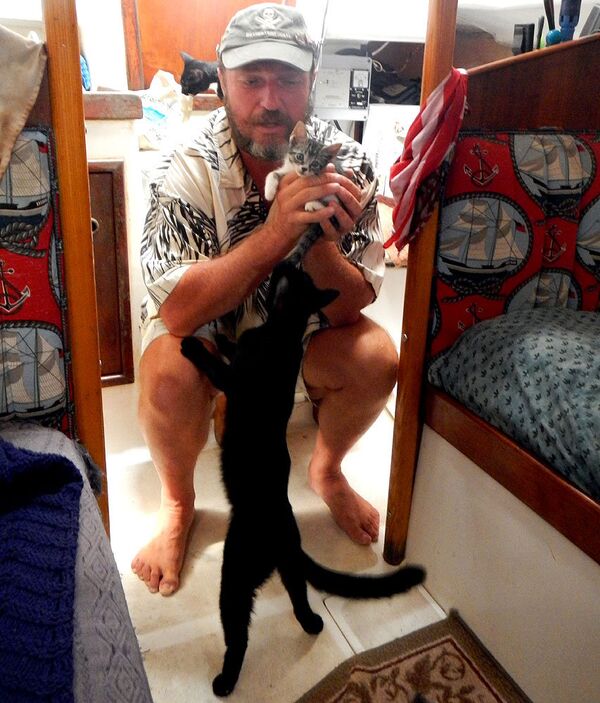 According to Morozov, he is not in search of glory and is not seeking to prove anything to himself or others. It's all far simpler.

"I want to complete a round-the-world trip in a rowboat, without any long stopovers. I just want to give it a try - because trying something no one has done before you is an exciting experience," he said.

There have been two attempts so far to row around the world - Russia's Yevgeny Smurgis died trying, and the US-born Mick Bird gave up after covering one-third of the distance. Morozov’s application to the Ocean Rowing Society is officially considered to be the third.

"I'd love to be the third one to try, but the first to make it through to the end," he said. "It’s an ambitious project, and a costly one. A rowboat trip around the world would take place in several legs, but without any stopovers, as is the practice among today's ocean rowers. I’ll be able to stop for a month or two to recharge my batteries, but I'll do so on a support boat rather than on an escort boat."

In that respect, Morozov’s current sailing trip is also a chance to explore the conditions for his next trip – the local winds and currents. He hopes to get an idea of how he will feel when doing the same journey in the future, only in a rowboat instead.