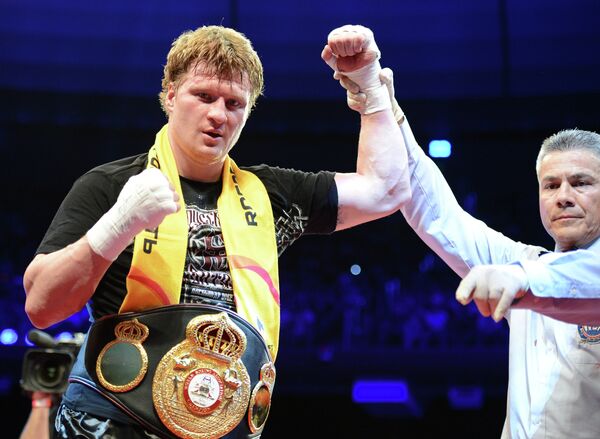 © RIA Novosti . Vladimir Astapkovich
/
Go to the mediabank
Subscribe
International
India
Africa
In a scenario reminiscent of the film “Rocky IV”, Russian heavyweight contender Alexander Povetkin will train in the wilds of Kyrgyzstan for his upcoming bout with four-belt world champion Wladimir Klitschko.

MOSCOW, June 14 (R-Sport) - In a scenario reminiscent of the film “Rocky IV”, Russian heavyweight contender Alexander Povetkin will train in the wilds of Kyrgyzstan for his upcoming bout with four-belt world champion Wladimir Klitschko.

In the film, title character Rocky Balboa isolates himself in a rural part of the Soviet Union, chopping down trees and hauling sleds as he eschews the high-tech training regime of his Russian opponent Ivan Drago.

Povetkin’s choice of training camp is just as remote, on the shores of the mountain-ringed Issyk-Kul lake in the former Soviet republic of Kyrgyzstan, sandwiched between Russia and China. And, just as in “Rocky IV”, he’ will be training for a heavyweight clash in Moscow.

The Russian’s trainer Alexander Zimin told R-Sport on Friday the camp would be at “mid-mountain conditions” and would last for most of next month.

“At that time, as experience shows, there are good climatic conditions for training, and the weather isn’t too hot, 24 or 26 degrees (78-82 Fahrenheit),” he said.

“Basic work will be carried out that will allow us to build a good basis for further preparation,” he added. “Fifty percent of the training will be given over to general physical preparation, and the other 50 for specialized preparation.”

Povetkin will be joined at his Kyrgyz retreat by cruiserweight Denis Lebedev, who is seeking a rematch with Guillermo Jones, after the Panamanian defeated him for the WBA belt last month.

The bout with Klitschko will be the biggest fight so far for the unbeaten Povetkin, known as the "Russian Vityaz," who holds the WBA regular champion title. Povetkin has 25 career wins, 19 of them by knockout as was Olympic superheavyweight champion in 2004.

Ukraine’s Klitschko, who has the monicker of "Dr. Steelhammer," has won 60 professional bouts and lost three. His undefeated streak stretches back 18 fights to a technical loss to Lamon Brewster in 2004.

The Klitschko-Povetkin bout will take place October 5 in Moscow, with organizers eyeing the Olimpiisky arena as the most likely venue.